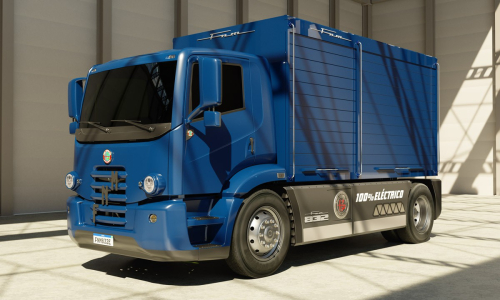 The Octillion battery in FNM trucks supports a range up to 300 km for urban deliveries.

FNM was founded in 1942 and was the first truck manufacturer in Brazil. The company was privatized in 1968 by the military government, and later bought by Fiat, which closed the factory in 1988. The rebirth of FNM began in 2008, when a Rio-based company that is active in the mobility sector acquired the rights in the Instituto Nacional da Propriedade Industrial (INPI) (the National Industrial Property Institute) to use the historic Brazilian trade name—including the badge, which had been inspired by the classical Alfa Romeo logo.

FNM’s headquarters is in Rio de Janeiro. Brothers and investors Zeca and Alberto Martins are partners in the holding company that owns FNM and opened the company’s new factory in Caxias do Sul city. They are sons of José Antonio Fernandes Martins, who was an executive and shareholder of Marcopolo for 53 years, the world’s second-largest motorcoach builder.

The truck manufacturers that operate in Brazil are ‘locked in’ to diesel, and FNM thinks differently, with a real ambition for electric vehicles, breaking barriers, changing the rules, and delivering clean, safe, silent connected logistics, signifying our client’s real green economy. We do not operate with dealerships, our business model is based on pre-sales contracts B2B, with trucks or buses produced under BTO (Build To Order) and with an “open spreadsheet”, which reveals all of our costs and profit margins to our clients. The FNM company is anything but normal.

FNM’s trucks will use niobium in various components—such as the chassis, brakes, suspension, wheels, and certain other parts and structural elements—to reduce the vehicle’s weight and increase its strength, performance, and range. (When added to steel, Niobium enhances its properties such as strength, toughness and formability.)

FNM says their trucks telematics systems will connect to customer’s information technology systems as well as to the factory to provide real-time efficiency and safety data.

Octillion is a Tier 1 supplier of advanced high-density energy storage systems focused on the electrification of passenger cars, trucks and buses. The company has delivered more than 100,000 EV batteries to the global EV market with more than 2 billion kilometers driven on its systems. Octillion is a turnkey battery supplier for the transportation market providing its customers with a bridge from design to manufacturing.