Developing lithium from the Salton Sea in California can help anchor a multi-billion dollar domestic electric vehicle battery supply chain and inject thousands of jobs and billions of dollars into California’s economically disadvantaged Imperial Valley, according to a new report from New Energy Nexus.

The report, Building Lithium Valley: Opportunities and Challenges Ahead for Developing California’s Battery Manufacturing Ecosystem details how recovering lithium—the foundation mineral for battery production—as a byproduct from the Salton Sea geothermal resource area can kickstart a clean economic recovery for California in the wake of the Covid-19 pandemic.

The world is in a race to dominate the electric vehicle market—the Europeans have made their Battery Alliance a priority and the Chinese are chomping at the bit. But America is sitting on an enormous competitive advantage with the amount of lithium in Southern California. Through meaningful engagement with the local community, building out the value chain downstream and around Lithium Valley can drive a just transition for the region, while catapulting the US into a leadership position in the 21st Century economy. 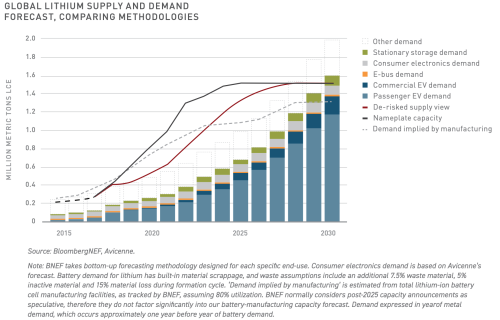 Some experts estimate that the known lithium resource in the Salton Sea can meet more than one-third of today’s global lithium demand. Global electric vehicle market growth is projected to rise from 1.7 million vehicles in 2020 to 26 million vehicles in 2030 and 54 million by 2040 at least.

Establishing a full battery manufacturing ecosystem, anchored in “Lithium Valley”, could not only support the transition to electrified transportation, but advance progress toward California’s climate goals, and serve as a vital source for critical minerals essential to economic and national security.

The new 2035 deadline for California’s transportation electrification amplifies the need to move immediately to rapid scaling of Lithium recovery operations to the manufacturing of battery materials, battery cells and vehicles. Battery manufacturers can also serve the accelerating stationary energy storage market, which uses batteries to support the power grid.

Residents in the Imperial Valley are dealing with urgent ecological and environmental emergencies. The report highlights that the development of a Lithium Valley could lead to community remediation funding to address respiratory health of nearby communities dealing with some of the worst pollution and Covid-19 impacts statewide, as well as protect the habitat of local fish and birds suffering due to the drying of the Salton Sea.

Who would have thunk the future of the electric car was carried by the waters of a endorheic sea that has been there for decades?