Researchers at the National Institute of Standards and Technology (NIST) and their colleagues have demonstrated a room-temperature method that could significantly reduce carbon dioxide levels in fossil-fuel power plant exhaust, one of the main sources of carbon emissions in the atmosphere.

Although the researchers demonstrated this method in a small-scale, highly controlled environment with dimensions of just nanometers (billionths of a meter), they have already come up with concepts for scaling up the method and making it practical for real-world applications.

The chemical process employed by the scientists also could reduce costs and energy requirements for producing liquid hydrocarbons and other chemicals used by industry. The method’s byproducts include the building blocks for synthesizing methane, ethanol and other carbon-based compounds used in industrial processing.

The team tapped a novel energy source from the nanoworld to trigger a common chemical reaction that eliminates carbon dioxide. In this reaction, solid carbon latches onto one of the oxygen atoms in carbon dioxide gas, reducing it to carbon monoxide. The conversion normally requires significant amounts of energy in the form of high heat—a temperature of at least 700 ˚C, hot enough to melt aluminum at normal atmospheric pressure. 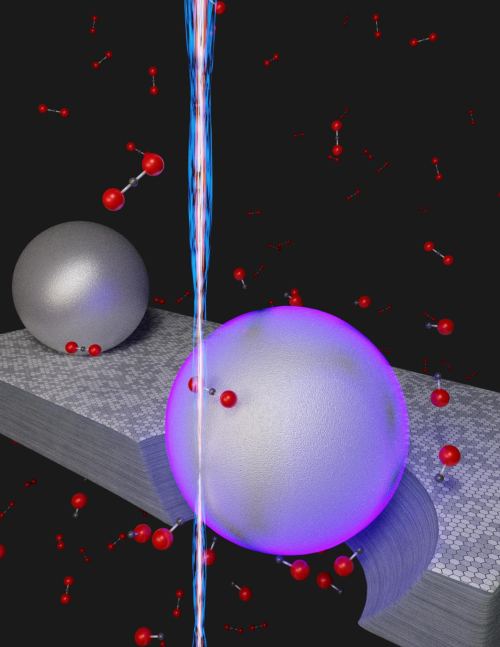 Illustration of a novel room-temperature process to remove CO2 by converting the molecule into CO. Instead of using heat, the nanoscale method relies on the energy from surface plasmons (violet hue) that are excited when a beam of electrons (vertical beam) strikes aluminum nanoparticles resting on graphite, a crystalline form of carbon. In the presence of the graphite, aided by the energy derived from the plasmons, carbon dioxide molecules (black dot bonded to two red dots) are converted to carbon monoxide (black dot bonded to one red dot. The hole under the violet sphere represents the graphite etched away during the chemical reaction CO2 + C = 2CO. Credit: NIST

Previous methods of removing carbon dioxide have had limited success because the techniques have required high temperature or pressure, employed costly precious metals, or had poor efficiency. In contrast, the LSP method not only saves energy but uses aluminum, a cheap and abundant metal.

She and her colleagues, including scientists from the University of Maryland in College Park and DENSsolutions, in Delft, the Netherlands, reported their findings in Nature Materials.

The researchers chose an electron beam to excite the LSPs because the beam can also be used to image structures in the system as small as a few billionths of a meter. This enabled the team to estimate how much carbon dioxide had been removed. They studied the system using a transmission electron microscope (TEM). Because both the concentration of carbon dioxide and the reaction volume of the experiment were so small, the team had to take special steps to directly measure the amount of carbon monoxide generated. They did so by coupling a specially modified gas cell holder from the TEM to a gas chromatograph mass spectrometer, allowing the team to measure parts-per-millions concentrations of carbon dioxide.

Sharma and her colleagues also used the images produced by the electron beam to measure the amount of graphite that was etched away during the experiment, a proxy for how much carbon dioxide had been taken away. They found that the ratio of carbon monoxide to carbon dioxide measured at the outlet of the gas cell holder increased linearly with the amount of carbon removed by etching.

Limited by the size of the electron beam, the team’s experimental system was small, only about 15 to 20 nanometers across (the size of a small virus). To scale up the system so that it could remove carbon dioxide from the exhaust of a commercial power plant, a light beam may be a better choice than an electron beam to excite the LSPs, Canhui Wang, lead author of the paper, said.

Sharma proposes that a transparent enclosure containing loosely packed carbon and aluminum nanoparticles could be placed over the smokestack of a power plant. An array of light beams impinging upon the grid would activate the LSPs. When the exhaust passes through the device, the light-activated LSPs in the nanoparticles would provide the energy to remove carbon dioxide.

The aluminum nanoparticles, which are commercially available, should be evenly distributed to maximize contact with the carbon source and the incoming carbon dioxide, the team noted.

The new work also suggests that LSPs offer a way for a slew of other chemical reactions that now require a large infusion of energy to proceed at ordinary temperatures and pressures using plasmonic nanoparticles.

Carbon dioxide reduction is a big deal, but it would be an even bigger deal, saving enormous amounts of energy, if we can start to do many chemical reactions at room temperature that now require heating.

I'm a bit blown away, which is fairly rare for such early stage work.

But using renewable hydrogen that would give a complete fuel cycle for, say, light hydrocarbons, and using HT PEM or SOFCs I can't see the place for big battery BEVs.

What do you think?

Depending on how simple and cheap a system can be built, I wonder if we could install them on cars and trucks. Put them behind the catalyst. Maybe even as a retrofit program?

I do realize there is the safety issue of cars now emitting higher volume of CO that is dangerous to breath. For that I wonder how fast the CO will make bonds to something else?

Along with the coated radiators we can actively reduce emissions and convert some existing into less harmful compounds.

They would not fit this to cars, even if it were possible.
But it makes no difference where the CO2 is taken out, as it is not a noxious pollutant, and it can be taken out from powerplant smoke stacks or anywhere else convenient and it will have the same effect on reducing GHGs which is the point.
If taken out at that sort of location the CO would be combined with hydrogen on the spot to create methanol or whatever other light hydrocarbon was wanted.
That can be piped or shipped off to where needed, just like fossil fuels

I do not see how this reduces green house gases. You take one molecule of CO2 and add a C. Now you have 2 CO molecules. Do some some more chemistry (which, of course, takes energy) and now you have 2 hydrocarbon molecules which you then burn to create 2 CO2 molecules. Every time you do this process, you double the CO2 (actually more than that because you have also used additional energy to get this to work.) Also, where did the additional carbon come from? Probably by either incomplete burning of methane or by coking coal. This sounds like something the coal industry would have dreamed up.

My understanding is that once you have got CO2 reduced to CO, then all sorts of light hydrocarbons can be synthesised by the addition of renewable hydrogen.

I posted an old link, as that was exactly the bit which was missing, the reduction of CO2 to CO.

Since upu are one of the commentators here whom I respect, I would be grateful if you could outline your objection in more detail.

To be a bit more explicit, my understanding is that loads of reactions producing hydrogen lead to carbon being released, sometimes in a more or less pure form.

I am feeling exceptionally dim this evening, even for me, so can't think of the links off hand, but I rather thought this pretty much the missing link in the chain?

But again this runs counter to the concept of reducing CO2 emissions because you are burning carbon to get this reaction to go or you are adding other energy. Yes, it is possible to use a solar furnace and use biomass but I would just generate electric power and be done. What needs to be done is to use the available capital to make the largest reduction of green house gases. That is why I favor building out Battery Electric Transit first before trying to build fuel cell vehicles for the cases where the current battery technology will not work.

You get solid carbon out, which presumably might be used to provide the carbon for this.

I take your point that the aim is to reduce carbon emissions.

I am however not a fan of sacrificing the good as it is not perfect, and top down stuff in general.

The real world is messy, and too complex to allow extreme reductionism.

A lot of processes in themselves produce waste, but that waste can be used often at a remove in time and space for other output.

Another process I had in mind was that fuel cells have a much purer stream of CO2 than NG burners, facilitating reuse at much lower costs.

But yours is just the sort of critique and input I was looking for as I noodle this some more!

In general room temperature chemical processes, and apparently this technology is likely to be able to do other things too, are a very energy efficient way of doing things, so long as we are bright enough to use them in the right ways........

You can get CO2 then convert to CO, you can make H2 through electrolysis using renewable electricity then combine it with CO to get hydrocarbon fuels. One bonus is selling the O2, if the CO2 came from a fossil source you are reusing it and thus reducing emissions of fossil CO2.