Researchers in Spain have developed hydrogen production without contact electrodes via water electrolysis mediated by the microwave-triggered redox activation of solid-state ionic materials at low temperatures (< 250 °C). A paper on their work is published in Nature Energy. 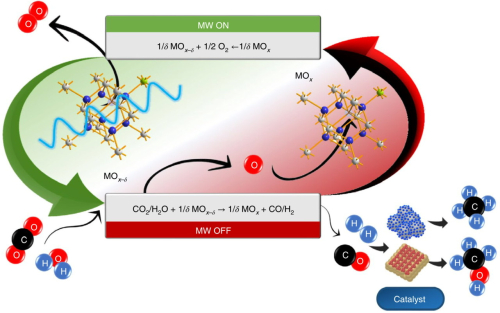 Schematic illustration of the microwave-induced redox cycle. Microwave irradiation of doped ceria materials induce its reduction and triggers the release of gaseous oxygen. The input of a suitable sweep gas on microwave switching-off leads to the material reoxidation via gas deoxygenation and the formation of valuable molecular energy carriers. Serra et al.

H2 produced from water and green power through solar thermochemical or photocatalytic water splitting and water electrolysis has become a sustainable alternative with negligible on-site greenhouse gas contribution. In thermochemical cycles, the highly energy-demanding splitting of water molecules (ΔHH2O=285kJmol−1) is often realized by using regenerable energy carriers (molecular or solid agents as metals or ceramics) that reduce water to yield H2. The redox activation of water is usually carried out by very high-temperature heating or galvanic methods to enable this non-spontaneous equilibrium-limited reaction, that is, with a large positive Gibbs free-energy change (ΔGH2O).

Electromagnetic processes such as microwave heatinig hold promise for smart manufacturing and activating chemical reactions and can enable electrochemical operation without contact electrodes and the restrictions of conventional electrolysis cells, those being constrained operation conditions and equipment complexity. Here we report the contactless H2 production from water, mediated by microwave-triggered redox activation of solid-state ionic materials. Water splitting is realized by the sole application of microwave radiation, which enables the chemical redox cycling of ceramic oxides at very low temperatures (<250 °C). 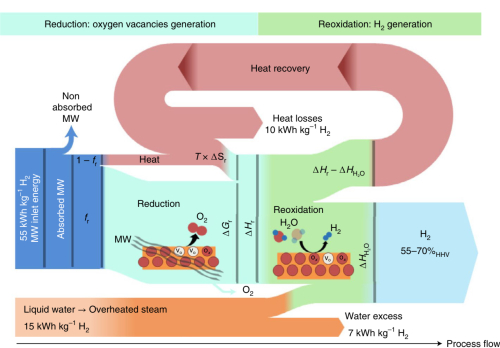 A Sankey energy diagram of the energy distribution of the complete microwave-assisted redox cycle for hydrogen production. The heat excess from CGO reoxidation is reused to supply the energy demand of the reduction step. Serra et al.

Water was reduced via reaction with non-equilibrium gadolinium-doped CeO2 that was previously in situ electrochemically deoxygenated by the sole application of microwaves. The microwave-driven reduction was identified by an instantaneous electrical conductivity rise and O2 release.

First, microwaves interact with the crystalline oxide, leading to an instantaneous rise in electrical conductivity that is accompanied by the material reduction (deoxygenation).

The second step involves splitting water through a spontaneous reaction with the activated material, which leads to direct H2 formation and reoxygenation of the material.

This process was cyclable; H2 yield and energy efficiency were material- and power-dependent. Deoxygenation of low-energy molecules (H2O or CO2) led to the formation of energy carriers and enabled CH4 production when integrated with a Sabatier reactor.

The researchers suggested that this method could be extended to other reactions such as intensified hydrocarbons synthesis or oxidation.

Not being familiar with Sankey diagrams I don't really get what the overall energy consumption per kg of hydrogen is - can anyone clarify?

It looks to me as though it is relatively low efficiency, but I am not sure what all the backflows indicate.

I am just ignoring those at the moment , and taking it at 55Kwh/kg for the ~33Kwh/kg of hydroge, but as I say the my reading is not sophisticated, or even adequate.

I find it's nonsense to label this technology as contact-free (which they do not say, but imply) when the who concept is that an oxygen-depleted oxide steals oxygen from water (steam), leaving hydrogen behind.

This concept is further hampered by the fact that it requires a sweep gas to remove the oxygen, which makes it harder to utilize.

I should note that when combining this concept with a Sabattier reaction (converting CO2 + 4H2 into CH4 + 2H2O) provides the heat required to generate the steam, and the 15 kWh/kg H2 may be recovered. This is also at least partially true for methanol synthesis, which is generally more useful.

CH4 made from hydrogen is weird with others are converting CH4 to H2. Both should not happen at the same time in the same market. The Sabattier reaction ties 4 hydrogen atoms to a carbon, when most hydrocarbon molecules operate at H/C ratio of about two (gasoline, diesel, kerosene).

Dehydration of CH3OH leads to CH2 (not stable molecule), which has the right ratio. DME (CH3OCH3) can also be produced and is also a useful chemical intermediate, or a nice diesel substitute in its own right.

PS. Sorry for the rambling...

The energy consumption sounds way too high for this to be of much use.

HT PEM and other technologies can hit way higher, and even industry standard alkaline without making use of waste industrial process heat etc comes out to around 55KWh/kg

Unlike PEM electrolyzers, this process doesn't seem to have any sensitivities to power cycling.  That may make it attractive for intermittent power supplies, especially "renewables".  Further, there are no precious metals involved so it may be cheaper per watt.