Sales of chargeable vehicles more than triple in EU in Q3 to take 9.9% new market share

In the third quarter of 2020, 9.9% of passenger cars sold in the EU were electrically-chargeable vehicles, compared to 3.0% during the same period last year, according to data from the European Association of Automobile Manufacturers (ACEA). The support measures introduced by various countries to stimulate car demand amid the COVID-19 pandemic disadvantaged conventionally-powered vehicles.

During the third quarter, cars powered by conventional internal combustion engines lost further ground, with their overall market share going down from 88.6% in July-September 2019 to 75.4% this year. Diesel cars accounted for 27.8% of total passenger car sales in the European Union, with registrations falling by 13.7% to 766,146 units.

Gasoline car sales posted an even stronger drop (-24.3%), going from more than 1.7 million units last year to 1.3 million units in the third quarter of 2020. This represents a market share of 47.5%, with gasoline going below the mark of 50% for the first time since 2016. With the exception of Cyprus, all EU markets saw declines in demand for gasoline cars during the three-month period, including the four major markets.

From July to September 2020, registrations of electrically-chargeable vehicles (ECV) more than tripled (+211.6%) to reach 273,809 units and a market share of 9.9%. This strong growth is mainly due to the introduction of incentives by national governments, seeking to boost demand in response to the Corona virus crisis, which has been largely to the benefit of buyers of battery and plug-in electric cars. 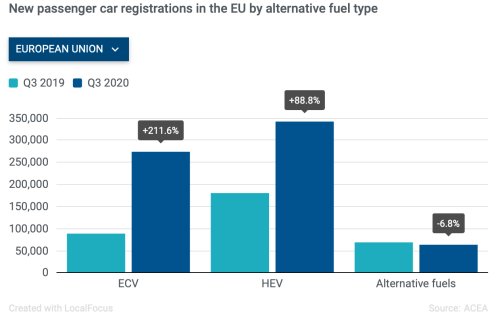 As a result, demand for plug-in hybrids (PHEV) boomed (+368.1%) during the third quarter, going from 29,557 units last year to 138,348 new cars sold in 2020. Both Germany and France recorded percentage increases of more than 400% each. Growth in registrations of battery electric vehicles (BEV) was also strong across the European Union (+132.3%), totalling 135,461 units over the three-month period.

Hybrid electric vehicles (HEV) remained the bestselling alternatively-powered vehicle type in the EU, posting an increase of 88.8% in the third quarter of the year. In total, 341,092 hybrid electric cars were sold from July to September 2020, representing 12.4% of the EU car market.

Demand for cars running on alternative fuels—ethanol (E85), liquid petroleum gas (LPG) and natural gas (NGV)—slowed down in the third quarter of 2020 (-6.8%), albeit at a more moderate pace compared to the previous quarter. This was mainly the result of declining sales of natural gas-fueled cars (-13.2%), while registrations of LPG vehicles remained almost unchanged (+0.8%).

We are starting to see affordable (<= e30K) EVs in Europe now, made by well known car companies like VW and Renault. Hence the increase.
It will be interesting to see if gasoline and diesel consumption go down - that is, after all, the point of going electric.

(Mind you, electricity is very expensive too).

Europe has the march on the US because they have a clearly defined path to clean energy; we on the other hand are still suffering from an unstable central government flailing around in the dark trying to bring back fossil fuel against the advice of the many scientist pushing for clean energy. Hopefully, this problem will not continue much longer.