More than half of UK drivers (57%) say having access to a car is more important than it was before the coronavirus pandemic, with reluctance to use public transport in the future at its highest level in 18 years, according to research for the RAC’s annual Report on Motoring.

Although the nationwide lockdown begun in March led to a marked decline in traffic levels, the 2020 Report on Motoring found that motorists are now more reliant on their vehicles than in the past—largely due to concerns about the safety of public transport and a lack of adequate alternatives. 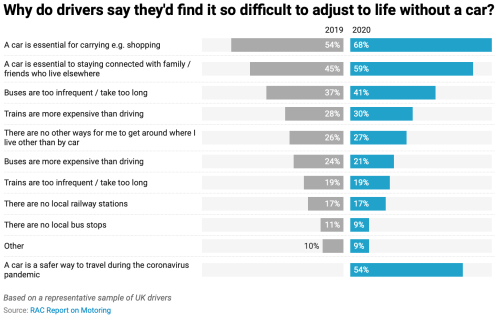 Two-thirds of drivers in three specific groups—young drivers, those with fewer than 10 years’ driving experience and people living in the capital—are all significantly more likely to say they need a car more now than they did before March.

A majority (64%) still expect to drive to offices or other places of work in the future, a figure which is almost unchanged on the 67% who said they did so before the pandemic. A little over a third of drivers (36%) said they expect to work from home more frequently in the future as a result of the coronavirus.

Despite the rise in home deliveries, nearly seven-in-10 drivers (68%) say a car is essential for carrying items such as shopping, up from 54% last year—perhaps partly driven by the rise in click-and-collect services and people carrying out fewer, larger grocery shops than before the lockdown.

Meanwhile, six-in-10 drivers (59%) say the car is essential for meeting up with friends and family who live elsewhere in the country, significantly up from 45% in 2019.

The research also shows the scale of the challenge to encourage drivers to switch from their vehicles to public transport for some trips even in a post-pandemic scenario. For the first time since 2002 fewer than half of drivers (43%) say they would use their cars less, even if public transport was improved—down sharply from 57% in 2019.

Taken at face value, the declining appeal of public transport seemingly represents a seismic shift compared to recent years, and suggests drivers are more wedded to their cars than they have been for a long time, the RAC said. It also reflects ongoing safety concerns of using potentially crowded public transport systems.

Even with lower traffic volumes, the pandemic appears to have reinforced the bond between drivers and their cars, with public transport less attractive than ever. Motorists see having access to a car as being even more important for the trips they need to make, be that shopping for essentials or getting out to see family and friends in other parts of the country when restrictions allow.

Without a concerted effort from government and local councils, the pandemic risks putting efforts to encourage drivers out of their cars for some trips back by years. Even before the coronavirus, drivers complained that public transport fares were often too high and services didn’t run when they needed them to. Now, for the first time since 2002, we have fewer drivers than ever saying they’re prepared to use public transport even if services improved—underlining just what a huge role the car continues to play in 2020.

As cities seek to improve air quality and make urban centers cleaner places, it’s clear that low-cost, efficient alternatives to the car need further thinking and much greater financial investment. Park and ride sites make a lot of sense and cater for the many people who are too far from regular public transport networks, but perhaps now is the time for the concept to evolve to encompass park and cycle, park and walk, or even park and scoot.

A failure to invest in adequate alternatives for drivers keen on accessing town and city centers risks stifling the recovery of these areas as shopping and tourist destinations as we eventually come out of the coronavirus pandemic.