A new report from the National Renewable Energy Laboratory (NREL) finds that about 12.0% and 49.6% of the necessary Level 2 and DC fast EV charging equipment (EVSE), respectively, required to meet projected demand in 2030, have been installed as of Q1 2020.

As of Q1 2020, there were 13,627 public and workplace DC fast EVSE and 71,975 public and workplace Level 2 EVSE available in the United States, according to the report. In Q1, all categories of electric vehicle supply equipment (EVSE) grew. Overall, there was a 6.9% increase in the number of EVSE.

Using data from the US Department of Energy’s (DOE’s) Alternative Fueling Station Locator, the report breaks down the growth of public and private charging infrastructure by charging level, network, and location. The report also measures the current state of charging infrastructure compared with the amount projected to meet charging demand for an estimated 15 million plug-in electric vehicles by 2030. 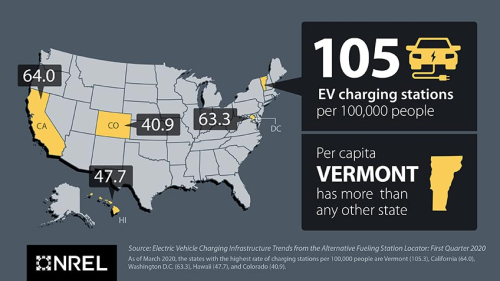 A map of the United States showing Vermont with the most EV charging stations per 100,000 people, at 105, followed by California at 64, Washington, D.C. at 63.3, Hawaii at 47.7, and Colorado at 40.9. California continues to lead the country in terms of the total public EVSE available.

Among the report’s findings: