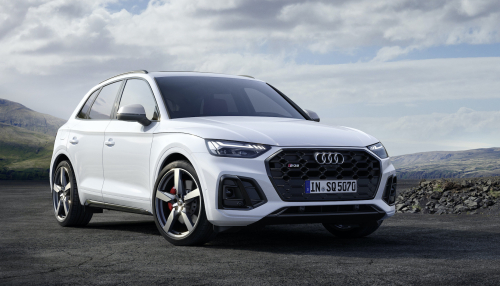 The 3.0 TDI develops its power earlier and more forcefully than before. It accelerates the top model of the Q5 product line from 0 to 100 km/h (0 to 62.1 mph) in 5.1 seconds and on to an electronically limited top speed of 250 km/h (155.3 mph). An actuator in the exhaust system, as fitted to the first SQ5 TDI, gives the V6 a sonorous sound.

Many details of the V6 3.0 TDI have been revised. The pistons are no longer made of aluminum but of forged steel—the new material reduces heat losses. Due to the higher strength, they do not incur a weight penalty compared with the aluminum pistons. A stepped recess in the piston makes combustion faster and more efficient.

The solenoid injectors used to inject the fuel operate with consistently high precision due to a new piezo sensor that monitors the closing of the needle. They can perform up to eight injections per work cycle, with injection quantities that are scalable with even greater precision. The maximum injection pressure is 2,500 bar.

The intercooler has been changed over from an air/air cooler in the bumper to an indirect water/air cooler in the inside V of the engine. The shortened intake air paths help to build up boost pressure quickly. The indirect intercooler is more effective and can even heat the intake air shortly after the engine is started in cold ambient conditions in order to reach the ideal combustion temperatures more quickly. This offers the advantage since exhaust gas cleaning responds more quickly.

The turbocharger now features a smaller and lighter compressor wheel that gets into gear with exceptional speed—a key factor in the engine’s spontaneous and high torque build-up. The exhaust manifold benefits from improved insulation; the exhaust gas reaches the optimum temperature more quickly after a cold start. 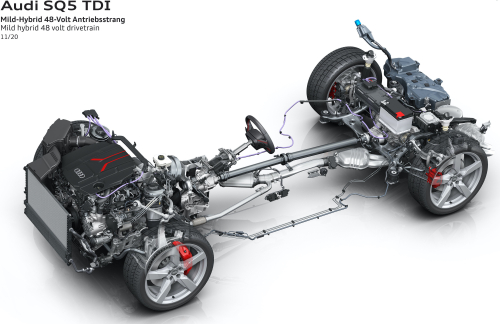 When the car decelerates, the MHEV system recovers up to 8 kW of power. The sport SUV can coast for up to 40 seconds with the engine switched off, after which time the powerful BAS conveniently restarts the engine. The MHEV system has the potential to reduce customer fuel consumption by up to 0.7 liters (0.2 US gal) per 100 kilometers (62.1 mi).

The second technology component is the electric powered compressor (EPC), which helps out whenever the exhaust gas flow provides too little energy to drive the turbocharger. A compact electric motor, which also uses the compact 48-volt system, accelerates the compressor wheel of the EPC to 65,000 rpm in roughly 300 milliseconds.

The EPC is now used more frequently and across a broader engine map. It supports a more spontaneous engine response when the vehicle moves off as well as when accelerating from low engine speeds. The optimized interaction between the components EPC, MHEV, turbocharger, the engine itself, and the tiptronic transmission supports this effect.

The first of these is located directly behind the manifold in the exhaust gas system, where it also functions as a particulate filter. The second is located further away from the engine under the vehicle floor. Both catalytic converters complement each other’s effects because they cover different operating situations and exhaust gas temperature windows. The SCR catalytic converters are supplied with the AdBlue urea solution from a 24-liter tank.

With twin-dosing technology, the SQ5 TDI comes in substantially below the limits of the new “Euro 6d ISC-FCM AP” emissions standard, which also stipulates a significant reduction in NOx emissions in the real driving test conducted on public roads in everyday traffic situations.

Eight-speed tiptronic. Power is transmitted by an eight-speed tiptronic featuring fast and convenient shifting and a gearshift strategy that has been adapted to suit the modified engine. When the SQ5 TDI is in coasting mode with the engine switched off, a clutch in the central transmission opens and interrupts the power flow.

In normal driving conditions, the quattro permanent all-wheel drive system distributes torque between the front and rear axle in a 40:60 ratio. In the event of slip, most of the drive torque goes to the axle with the better traction. Up to 70% can flow to the front wheels and a maximum of 85% to the rear wheels.

During fast cornering, the wheel-selective torque control rounds off the handling with minor brake interventions at the relieved wheels on the inside of the curve.

The SQ5 incorporates all of the assistance systems from the Q5. The turn assist, collision avoidance assist, and exit warning help improve safety. The adaptive cruise assist can take over accelerating, decelerating and keeping in lane for drivers over long distances. The predictive efficiency assist helps them maintain a predictive driving style with the goal of lowering fuel consumption.

The updated Audi SQ5 TDI will be built at the Mexican plant in San José Chiapa and launched on the market in Germany and other European countries during the first quarter of 2021. Its base price is €68,137.82 (US$80,600) (in Germany, including 16% value-added tax).

It would be nice to see all that technology in a smaller, lighter car like an A4 or and A6 (in a 2L diesel as well).

@mahonj,
Well, it depends on what technology and engine size you refer to. We could compare to a 2-liter 4-cylinder engine there is really not much difference in technology compared to this V6. Valve layout, piston and combustion chamber might even be close – or identical – to other VW products. An injection pressure of 2500 bar and twin-dosing of urea is also applied on 4-cylinder engines. In fact, VW was one of the pioneers when it comes to twin-dosing and I think it came first on the 2-liter engine. MHEV is also available on smaller engines. It basically boils down to the e-compressor. Is this superior to twin-turbo, as Audi wants us to believe? I would say: not… very much difference. A state-of-the-art 2-stage turbocharging system can provide at least as high specific power density and similar transient response. Recall that the state-of-the-art power level on a 2-liter engine is in the 240-250 hp range. That is far better than for the Audi V6 engine. One should also note that twin-turbo system is very difficult to apply on a V6 engine due to packaging reasons and the large volume of the plumbing on the exhaust side decrease performance and transient response. This is, of course, a rationale for using the e-compressor instead of twin-turbo on this engine. Besides packaging, however, there is little gain. The basis for benchmarking could, instead, be an in-line 6-cylinder engine with twin-turbo. The Mercedes OM656 engine (e.g. S 400d) is such an engine and it provides 340 hp and 700 Nm of torque. Pretty close to the Audi V6 TDI! Moreover, the OM656 has slightly smaller engine displacement than the Audi. Yet another comparison would be the 4-cylinder engine (OM654) from the same Mercedes engine family, which has an output of 245 hp and torque of 500 Nm.

@Peter, you really know your Audi engines, i can say that.

I would say that real advancement in engine technology is usually difficult to find. Most of the technology we find on new engines has normally been known for some time before we see it in production. Oftentimes, we can receive such information from the suppliers to the automotive industry. Sometimes such innovation never seems to mature or tends to be too expensive or, by the end of the day, has significant drawbacks or some other issues.