Moscow, Russia has launched its 500th electric bus—a KAMAZ 6282 electric bus. The KAMAZ 6282 uses lithium-titanate batteries, and has a range of 70 km on one charge. The electric bus is charged in 6-12 minutes with ultrafast charging stations using a half-pantograph. In addition, an on-board charger allows charging the drive from a three-phase 380 V alternating current (“night charge”). 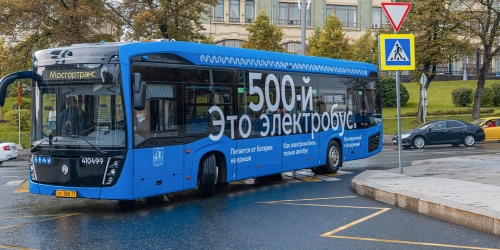 Moscow’s electric fleet is thus the largest in Europe. For comparison—in October, there were 300 electric buses in London, 259 in Paris, 200 in Berlin and 164 in Amsterdam, according to Mosgortrans, the major bus operator of the city.

In October, Mosgortrans announced it had 38 electric bus routes operational in Moscow, up from 36 just a few weeks earlier.

Moscow’s Department of Transport says that the city will launch the Moscow-based production of electric buses next year, with planned capacity of about 400 electric buses in Moscow a year.

Nice to get some good news from Russia.
IMO, electric buses are a very good thing for urban areas as they reduce the amount of non CO2 pollution in crowded places.
Interesting that they can be charged at -40c - that's Russia for you.
Also that they only have a 70km range (and are presumably perfectly OK).
Q: What is a half pantograph?