The California Center for Jobs & The Economy has released an updated report (earlier post) on vehicle sales and the progress of ZEV sales in the state for Q3 2020. The report is based on sales data from the California New Car Dealers Association (CNCDA).

The data show total new light vehicle registrations in the third quarter were down 19.6% from the same period in the prior year, an improvement over the 48.9% drop in the second quarter but still lagging well behind the overall national decline of 8.4%.

In an indication of the disparate income effects of the ongoing reopening/shutdown cycle in the state, sales of the higher cost alternative fuel vehicles held up better as higher wage workers have been more able to retain their jobs and incomes through telecommuting, according to the California Center for Jobs & The Economy. 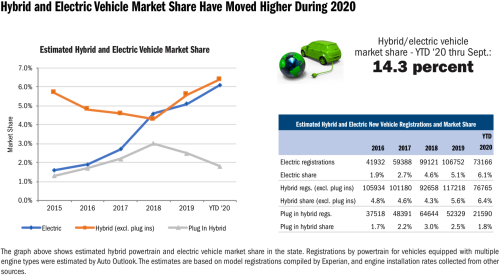 Total PEVs (plug-in electric vehicles) however were down as the PHEV (plug-in hybrid) component continued to show its high variability over the past several quarters, dropping from 12,992 units in Q3 2019 to 5,866 in Q3 2020.

Reflecting their now consistent trend of recovery following a drop at the beginning of the year, HEVs comprised 49% of the alternative fuel registrations, up from 42% in the same period in 2019. The combustion vehicle component of this market segment—PHEVs and HEVs—overall comprised 58% of the new registrations, again indicating a continuing hesitance on the part of consumers to shift to fully electric vehicles, either because of concerns over refueling and range or due to the remaining high bump in cost.

Tesla remained the dominant producer of BEVs and consequently the primary beneficiary of the incentives and subsidies enacted by the regulatory agencies. However, Tesla sales in the quarter were down to 62% of all BEV registrations, a drop from its previous near monopoly over this segment. Future quarters will provide additional insight into whether this becomes a trend and whether the market is now evolving to a broader range of producers offering models that appeal to a larger share of consumers beyond the higher income segment targeted to date by Tesla.

While the maintenance of higher wage households has been more secure under the state’s restrictions, lower wage households have instead turned to the used vehicle market as transit use has collapsed throughout the state. The need for workers to secure alternative means to get to their jobs has seen an upsurge in prices for used vehicles both in California and the US.

Applying the same weighting formula used by Department of Finance to calculate the California consumer price index to the individual components, prices for used cars and trucks increased only 0.4% between 2018 and 2019 in California, and 1.0% for the US as a whole. Between January and September of this year, the rush to find alternative transportation has seen used prices jump 11.0% so far in California and 12.4% in the US.

State Goal: 100% ZEVs by 2035. California previously maintained a goal of 5 million zero-emission vehicles (ZEVs) on California roads by 2030 pursuant to Executive Order B-48-18. Under Executive Order N-79-20, the governor recently changed this goal to require all new vehicles offered for sale in the state to be ZEVs by 2035 for light duty cars and trucks, and by 2045 for heavy- and medium-duty vehicles.

Currently, ZEVs comprise 6.7% of new light vehicle registrations as measured against the diminished sales base in the third quarter. The current trendline estimated from a regression of the data to date shows sales are currently on track to reach the 100% market share target sometime in 2045, according to the California Center for Jobs & The Economy. In 2035, sales would be only half of vehicles under current trends.

Substantial deviation from trend would have to begin prior to 2025 in order to meet the 2035 goal, meaning sales over the next 4 years will be a critical measure of how viable this new goal is and an indication of the costs to workers and consumers required to meet it. Policy makers do not have to wait 15 years to determine whether the Order’s goal is viable or not, the Center observed in its report.