GM boosting EV product spending to $27B through 2025; 1st use of Li-metal anode in GM battery

General Motors Co. Chairman and CEO Mary Barra said that the company will offer 30 all-electric models globally by mid-decade; 40% of the company’s US entries will be battery electric vehicles by the end of 2025. Barra also announced an increase in GM’s financial commitment to EVs and AVs (autonomous vehicles) to $27 billion through 2025—up from the $20 billion planned before the onset of the COVID-19 pandemic. 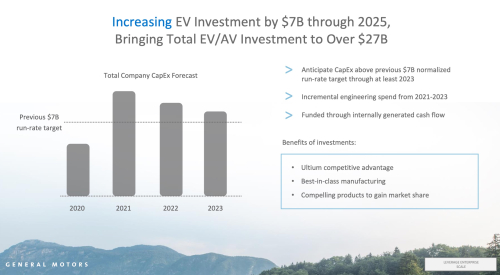 Climate change is real, and we want to be part of the solution by putting everyone in an electric vehicle. We are transitioning to an all-electric portfolio from a position of strength and we’re focused on growth. We can accelerate our EV plans because we are rapidly building a competitive advantage in batteries, software, vehicle integration, manufacturing and customer experience.

Ultium already represents an achievement in electrification, with battery pack costs nearly 40% lower than those in the Chevrolet Bolt EV. Despite the pandemic, GM’s work on EVs accelerated during 2020.

Just eight months after the technology was first revealed, GM is projecting that second-generation Ultium packs, expected mid-decade, will cost 60% less than the batteries in use today with twice the energy density expected. 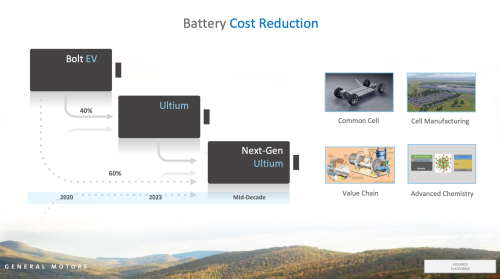 These second-generation cells will get closer to cost parity with gas-powered engines due to:

GM has completed hundreds of test cycles on the multi-layer prototypes of this next-generation Ultium cell chemistry. Production cells are expected by mid-decade.

The Ultium platform is flexible enough to accept new chemistry and even cell types, without redesigns to its architecture. Ultium batteries will be easy to service at the module level, which makes repair costs less expensive than having to replace the whole pack.

GM is doing most of the development work on these cells internally at its Chemical and Materials Systems Lab, located at the Global Technical Center in Warren, Michigan. This facility features a fabrication line with polymer mixing, slurries, a coating machine and a cell assembly room.

Next year, GM will break ground on an all-new Battery Innovation Lab and Manufacturing Technology Center to develop the next-generation Ultium battery chemistry.

GM speeds its EV rollout and pace of innovation. The modular and highly flexible qualities of the Ultium system, along with engineering advances in battery technology, the use of virtual development tools and lessons learned during the HUMMER EV development process, have enabled GM to bring EVs to market much faster than originally planned.

The 2022 GMC HUMMER EV’s development time of 26 months—down from about 50 months—is now the benchmark. 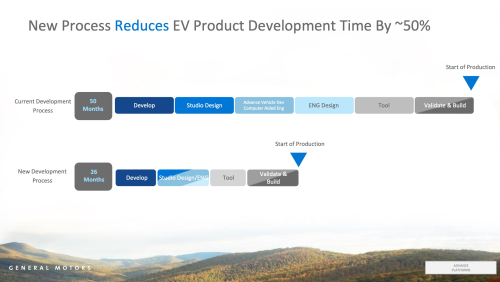 The development schedules for 12 vehicle programs have been moved up, including:

After the GMC HUMMER EV, the next EV to launch will be the LYRIQ, Cadillac’s first all-electric vehicle, which will arrive in the first quarter of 2022, nine months ahead of schedule.

All sounds good except the timeline isn't...looking ahead to the middle decade is a long time in today's car business...Tesla and VW will have run away with the goods by then.
I think all the U.S. makers will lose a large part of the market because they cannot move fast enough