Three of the most popular plug-in hybrids in 2020 all emitted more CO2 than advertised when tested in the real world, according to tests commissioned by European environmental NGO Transport & Environment (T&E). T&E said governments should therefore end the purchase subsidies and tax breaks for plug-in hybrids.

T&E has commissioned Emissions Analytics to test three of the most popular PHEVs sold in 2019: a BMW X5 (longest EV range PHEV available), a Volvo XC60 and the Mitsubishi Outlander. Among the findings: 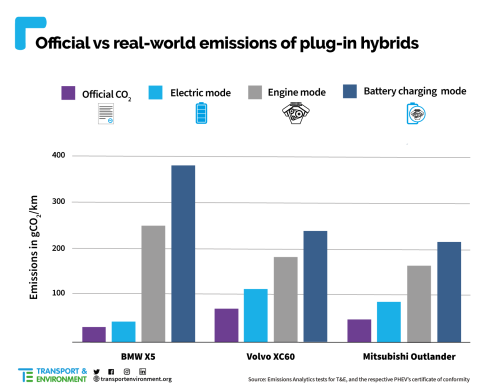 Plug-in hybrids are fake electric cars, built for lab tests and tax breaks, not real driving. Our tests show that even in optimal conditions, with a full battery, the cars pollute more than advertised. Unless you drive them softly, carbon emissions can go off the charts. Governments should stop subsidising these cars with billions in taxpayers’ money.

Once the battery is flat, the three plug-in hybrids can only drive 11-23km in engine mode before they overshoot their official CO2 emissions per km, T&E estimates. This is contrary to the misleading carmaker narrative that PHEVs on sale today are suited for long journeys, T&E said.

While carmakers blame customers for using the engine too much, the PHEV models on sale today often lack the necessary EV power, range or charging speed, T&E argued. For example, two of the three cars tested, the BMW X5 and Volvo XC60, cannot fast charge. Even the Outlander’s manual states that the engine may start if the PHEV system is too hot or too cold, if quick acceleration is applied, or if the air conditioning is operating.

Selling plug-in hybrids makes it easier for carmakers to meet their EU car CO2 standards as PHEVs are currently given additional credits. T&E said the EU should end this weakening of the regulation when it reviews the targets for 2025 and 2030 next year.

Bit of a shame as a PHEV is an almost perfect vehicle.
Which brings me to my hobby horse - the two car PHEV.
You have a short range BEV (like a Mk1 Leaf) and an ICE vechicle.
You use each as appropriate.
This depends on having access to two cars. You don't have to own both, although many families already will.
If not owned, the second car could be shared in some way or just rented.
Garages selling EVs could provide a swap/borrow scheme for when people needed the long range of an ICE.
Or you could just rent for a few days.
Or you could set up a car sharing club where everyone contributes a car, either EV or ICE and they can swap them around. Probably wouldn't want brand new cars in it, but anything 3-5 years old that wasn't that precious would work well.
I look out my window and I see dozens of ICE cars just sitting there that could be swapped for an EV for a couple of days, once the legal issues (and insurance) were worked out.
This is as much an administrative problem as a technical one.

@mahonj:
Many are predicting road transportation in the future will be via self-driving taxi services.

@Lad, sure, but we aren't there yet. We may have motorway lane keeping and active cruise control, but full self driving is in the future (no matter what Elon says).
+ people still like to own (at least 1) car.