By making use of a previously undesired side effect in oil recovery, researchers at Tokyo University of Agriculture and Technology (TUAT) have developed a method that yields up to 20% more heavy oil than traditional methods. A paper on the work is published in the ACS journal Energy & Fuels.

The total estimated volume of recoverable heavy oil is almost the same as the remaining light reserves in the world. With the depletion of light oil resources and rising energy demands, the successful recovery of heavy oil is becoming increasingly important.

Generally, less than 10% of heavy oil may be produced from reservoirs by natural flow after drilling the well. To yield more oil, water may be injected into the reservoir to maintain pressure in order to keep the flow moving. Engineers may also make the water more alkaline by adding sodium hydroxide or sodium carbonate to help the oil flow better. Called chemical flooding, this process often fails to yield much heavy oil, as it is too thick for even the enriched water to sweep up.

Heavy oil can also be made to flow more easily through heat, but that’s not a tangible solution for deep or thin reservoirs, according to Nagatsu.

Because the viscosity of water and heavy oil differ so greatly, Nagatsu said, contemporary sweep methods are inefficient for heavy oil recovery.

To correct this inefficiency in chemical recovery, Nagatsu and his team injected calcium hydroxide into their model reservoir. The compound helps oil to flow more smoothly but is usually considered undesirable because it reacts with the oil to produce a metallic soap where the water and oil interface.

Furthermore, the novel flooding enhanced heavy oil recovery in the wide range of the concentration of acid tested. Additionally, we find that the viscoelasticity is maintained up to 80 °C. The proposed method benefits from the adversity of the precipitate formed by a divalent ion (as a result of using polymer, surfactant, or alkali), which is commonly regarded as an undesirable factor for chemical flooding. This method is surfactant- and polymer-free. On the basis of these considerations, this study introduces a novel chemical flooding method for enhanced recovery of heavy oil, which is inexpensive, high-divalent-ion-tolerant, high-temperature-tolerant, and energy-saving. 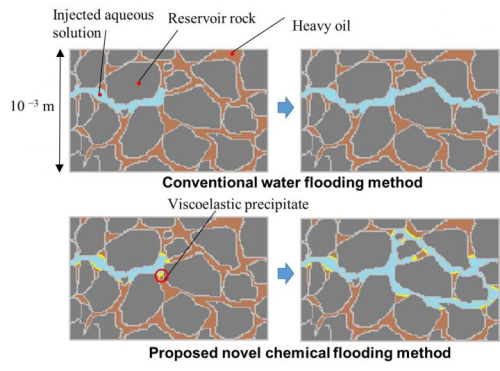 The metallic soap stops the sweeping flow from moving into already swept areas, forcing the forward recovery of heavy oils locked deep in rocks and crevices. In experimental testing, the method yielded 55% of oil in the reservoir, compared to a 35% recovery using alkaline water and a 33% recovery using regular water. Nagatsu noted that this method is inexpensive, can be used in a range of temperatures and it does not require energy-consuming techniques to perform.

The researchers plan to study the effectiveness of this method across crude oil viscosity ranges and in different ranges of oil reservoir permeability in laboratory experiments before moving to field tests. They would also like to engage with industry to further develop the technology for practical application, Nagatsu said.

I'm sure all that heavy oil won't put any extra CO2 into the atmosphere.

It appears the researchers at Tokyo University of Agriculture and Technology (TUAT) have developed a method that yields more heavy oil than traditional methods.
The on-going problem with expensive unsuccessful chemical flooding in heavy oil reservoirs is an inefficient sweep efficiency to improve heavy oil mobility in the reservoir.
It is an interesting approach to contain an acid component generated by a chemical reaction to improve the swept region and sweep efficiency.
The key issues to improve are viscosity reduction, a reduction of interfacial tension, emulsification of the oil, and wettability alteration that maximizes oil mobility for more efficient and increased heavy oil recovery.