The Volkswagen 2021 ID.4 electric SUV 1st Edition and Pro models officially have an EPA-estimated 250 miles of range on a single charge. The EPA-estimated fuel economy for city driving is 104 MPGe; highway driving is rated at 89 MPGe, and combined city/highway at 97 MPGe. 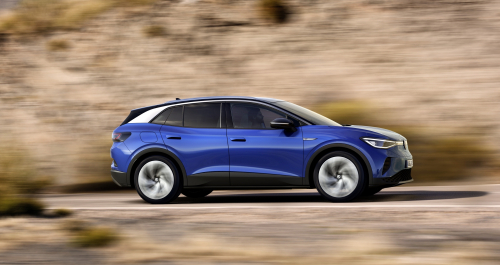 The first models to be launched—ID.4 1st Edition and ID.4 Pro—offer an 82kWh (gross) battery and a rear-mounted AC permanent-magnet synchronous motor with 201 horsepower and 228 pound-feet of torque. At a DC fast-charging station, with 125 kW charging, the ID.4 can go from five to 80% charged in about 38 minutes.

According to the EPA’s calculations, based on an electricity cost of 13 cents per kilowatt-hour, the ID.4 has estimated an annual fuel cost of $700. Compared to the average new vehicle, this will save owners $2,250 over five years according to the EPA—although electricity rates will vary widely based on locale.

ID.4 owners also benefit from three years of unlimited charging sessions with Electrify America at no additional cost to the vehicle’s purchase price.

Looks like VW are taking electrics very seriously.
The ID3 is a big hit in Ireland.
I think people would rather buy from an established car manufacturer than Tesla, mainly for reliability and service.
Also, the Model 3 is a good deal more expensive than the ID3 in Europe.