Solaris to supply two hydrogen buses to Transdev in Sweden

Operator Transdev has signed a contract with Solaris Bus & Coach to supply two hydrogen buses. The vehicles will roll out onto the streets of the Swedish city of Sandviken in autumn 2021. 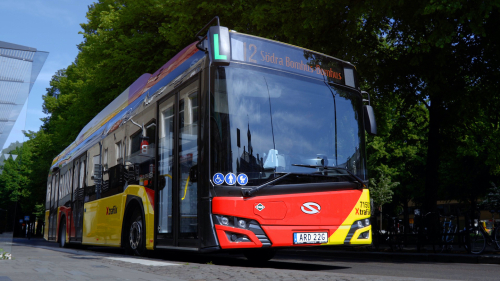 Solaris Urbino CNG (in yellow and red), operating X-Trafik Gävle—the hydrogen buses in Sandviken will have the same look.

Transdev signing the contract with Solaris for the supply of two hydrogen buses is a result of the region’s long-term transport strategy. Sandviken is a nearly 25,000 strong town located in the Swedish region of Gävleborg, which has lately been betting on eco-friendly solutions.

Gävleborg is seizing the initiative regarding the green transition. It is being underlined both at a national and European level that hydrogen is crucial in the transition to electrified transport, and Gävleborg, with its local and regional firms, can boast particularly favourable conditions in this regard. The green transition must proceed much faster than it is now, so it is obvious that we will spur its development and test this technology.

—Eva Lindberg, chairwoman of the District Council for the region of Gävleborg

The Urbino 12 hydrogen buses are fueled with power generated by a 70 kW fuel cell. They will be driven by an axle with electric motors. Besides that, the ordered vehicles will be fitted with Solaris High Power battery acting as an additional electric power storage facility.

The hydrogen is stored in gaseous form in five tanks, mounted on the bus roof, with a total capacity of 1560 liters.

Solaris has been committed to e-mobile solutions for many years now, focusing on the future of public transport. The first electric bus made by Solaris was delivered to Sweden back in 2014. Now we deliver the first hydrogen bus. We feel honored that the region of Gävleborg and operator Transdev have trusted our experience and opted for Solaris solutions. This order is an important and strategic breakthrough in the implementation of the latest generation of electric buses of the future.

The ordered Solaris Urbino 12 hydrogen buses will be the first hydrogen buses to be operated by Swedish public transport. However, e-buses made by Solaris have wended their way through Sweden’s streets for more than 6 years. The partnership between Solaris and Swedish operators dates back to 2003. Since then, Solaris has supplied its customers in Sweden with more than 600 vehicles, the vast majority of which are low- or emission-free vehicles.