At the beginning of October, series production for battery-electric city buses started successfully at the MAN plant in Starachowice, Poland, beginning with the Lion’s City E in the 12-meter solo version. The first customer vehicles are now rolling off the assembly line for the Hamburg Holstein transport company (VHH).

The fully electric Lion’s City E as an articulated bus will follow around six months later and should go into series production in the first half of 2021.

The fully electric MAN Lion’s City E is flexibly built in the production process with the other models of the new city bus generation on one line and without bridging. 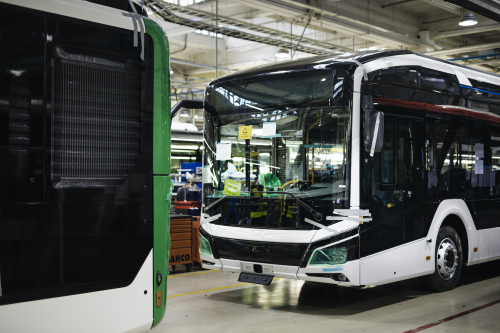 A wide range of efforts were necessary so that production can take place in a fully integrated manner. The body shell of the electric bus differs by around 30 to 40 percent from its conventional counterpart. Added to this are the electric drive train, batteries and other high-voltage components.

In preparation for production in Starachowice, new systems had to be purchased or expanded, processes had to be rethought and around 3,500 employees had to be intensively trained.

By the end of the year, 17 new electric buses are to be handed over to the Hamburg-Holstein transport company (VHH). For MAN, this is the first major customer delivery as part of a tender. In addition to Hamburg, another order comes from Malmö in Sweden, among others: Nobina Sverige AB, Scandinavia’s largest bus operator, has ordered 22 MAN Lion’s City E.

Starachowice is the competence center for the production of low-floor city buses and bus chassis. Last year, more than 2,300 complete buses and around 1,400 bus chassis were manufactured in the plant.