Empa, together with FPT Motorenforschung AG Arbon, Politechnico di Milano, lubricant manufacturer Motorex and other partners, is exporing the use of DME as a fuel for heavy-duty engines. A DME test engine has been in operation on a dynamometer in Empa’s Automotive Powertrains Technologies Laboratory. The scientists intend to provide sound data on the combustion process, efficiency and environmental impact of DME in the commercial vehicle sector. 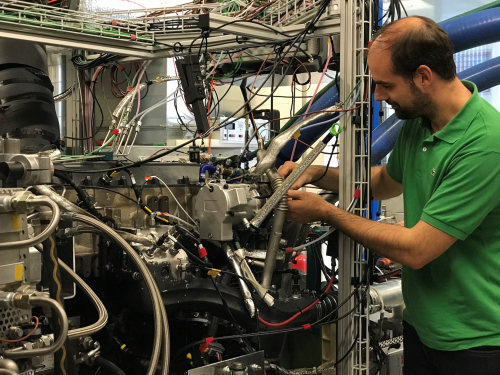 The diesel engine on the Empa test facility was tuned to DME. Image: Empa

We already know this engine very well. The engine block is derived from a Cursor 11 commercial vehicle engine manufactured by FPT Industrial and has already served us for five years in various research projects. Over the past few months, we have converted it to DME together with our partner FPT.

In contrast to diesel, the highly volatile DME has almost no lubricating qualities, which can quickly destroy the high-pressure pump of a common rail injection system.

The researchers want to run their test engine with pure DME, without using lubricating additives, as has been done in previous projects. In cooperation with a major European supplier, a new oil-lubricated common-rail pump had therefore been developed. In addition, the valves and valve seat inserts were converted to materials suitable for DME.

An electrically driven compressor for precise exhaust gas recirculation is also used. Finally, the combustion chambers and compression ratio of the former diesel engine have also been modified.

The new shape of the combustion chambers was developed with the help of mathematical simulations at the Politechnico di Milano. The research project is co-financed by the Swiss Federal Office of Energy (FOEN).

The researchers are starting with a medium-load driving style that is common in highway operation, where the engine must deliver 100 kW of power.

Then we modify the timing and pressure of the injection, among other things, and look at exhaust emission values and fuel consumption.

The big advantage of DME operation, says Soltic, is the opportunity to transfer a very high proportion of exhaust gas to the next charge in the cylinder. This is done via exhaust gas recirculation (EGR). This technology makes it possible to save a great deal of NOx, which eases the burden on the exhaust gas purification system behind the engine and allows future, stricter limits to be met easily. With fossil diesel, high exhaust gas recirculation rates lead to higher particle emissions, which is not the case with DME.

During the test phase, Empa researchers repeatedly take samples of the engine oil to trace chemical reactions The results are forwarded to project partner Motorex who uses the data to develop a new engine oil specially adapted for DME operation.

The results of the project are partly public and are discussed jointly among competitors in the vehicle industry. The project still in the pre-competitive phase, Soltic said.

The platform for these discussions is the “International DME Association” founded in 2001, which currently has 50 members from science and industry.

Dimethyl ether (DME) can be produced from hydrogen and CO2. If hydrogen is produced with renewable energy and CO2 is captured from the atmosphere, trucks could be driven with virtually no greenhouse gas emissions.

Empa researcher Andreas Borgschulte and his team are investigating chemical processes that produce DME as efficiently as possible. The method of sorption-assisted catalysis is considered to be very promising: The two gaseous starting materials, hydrogen and CO2, need to get in contact with active copper particles in order to start the chemical reaction to form methanol or DME. Water is formed as a by-product.

If water is removed from the reaction mixture, the chemical equilibrium shifts towards the product. In other words: Only then can the desired large quantities of methanol and DME be produced. To remove water, Empa researchers use zeolite, a water-absorbing mineral.

In lab experiments Borgschulte’s team found that, at a certain temperature, CO2 and hydrogen mainly produce DME, with only a rather small amount of methanol.

DME production using this method is therefore theoretically feasible. Unfortunately, at present the process is not yet very efficient.

The next step would thus be to refine the chemical process and develop suitable production facilities. Only then can we assess whether DME production using sorption-assisted catalysis is economically competitive. The research was carried out in collaboration with the University of Zurich as part of the LightChEC project.

DME might be a diesel engine developer’s wet dream. However, it will be very difficult to create a new fuel infrastructure for a new fuel with completely different properties than most of the mainstream fuels.

Oberon has been turning NG to DME for a while, use RNG.