At that time, Nikola and GM announced a strategic partnership that included GM taking an 11% stake in the Nikola and began with the Nikola Badger and carried cost reductions through Nikola’s programs, including: Nikola Badger, Nikola Tre, Nikola One, Nikola Two and NZT. As part of that agreement, Nikola would utilize General Motors’ Ultium battery system and Hydrotec fuel cell technology, representing a key commercialization milestone for General Motors.

Soon after the announcement, however, a short seller alleged Nikola had committed fraud and and exaggeration. Nikola disputed the report. 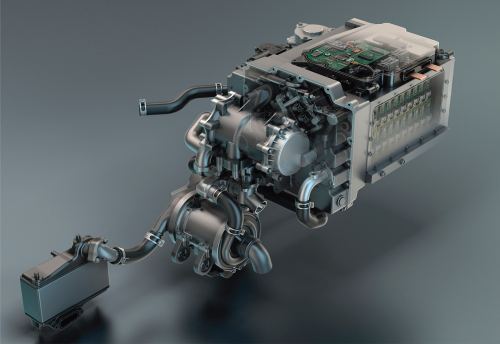 This supply agreement recognizes our leading fuel cell technology expertise and development. Providing our Hydrotec fuel cell systems to the heavy-duty class of commercial vehicles is an important part of our growth strategy and reinforces our commitment toward an all-electric, zero-emissions future.

Under the potential agreement referenced in the new MoU, GM would engineer its Hydrotec fuel cell system to the specifications mutually agreed upon by both companies, but not build the Badger pickup as earlier envisioned.

GM and Nikola will discuss the appropriate scope of services that GM would provide for the integration of the fuel cell system into Nikola’s vehicles. It is expected that the potential arrangement would be cost plus, and that Nikola would pay upfront for the capital investment for the capacity. GM and Nikola will also discuss the potential of a supply agreement for GM’s versatile Ultium battery system for Nikola’s Class 7/8 trucks.

GM’s Hydrotec fuel cell system will be engineered at its Michigan technical facilities in Pontiac and Warren and manufactured at its Brownstown Charter Township battery assembly plant.

This has been quite a poke in the eye for GM; Many of us believe they were being scammed by Nikola.

It's 25kw, 33hp, you could just as well use a propane power truck APU.