The Wind Hunter Project combines wind propulsion sailing technology and wind energy converted to generate a stable supply of hydrogen. The project team aims to give a new and first step to realize a decarbonized and hydrogen society.

MOL is currently working on the “Wind Challenger Project” to develop sailing technology. The Wind Hunter Project applies this sail technology and combines hydrogen carriers and fuel cells with hydrogen generated by electrolyzer which the power is generated by power generation turbine.

This combination of sail and hydrogen technology will enable vessels to sail on schedule even in the periods of low wind and the project team plans to study about the application of supplying hydrogen generated at sea for onshore use. Both of these applications are aimed at creating a zero-emission business free of any greenhouse gas (GHG) emissions.

As a first step, the project team will demonstrate the feasibility of such a concept using a sailing yacht. The team will verify the function and performance of a series of cycle operations, including turbine power generation, hydrogen generation/storage and fuel cell related propulsion. 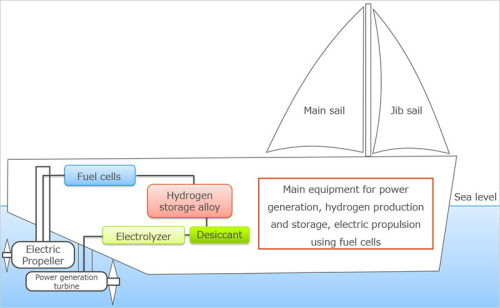 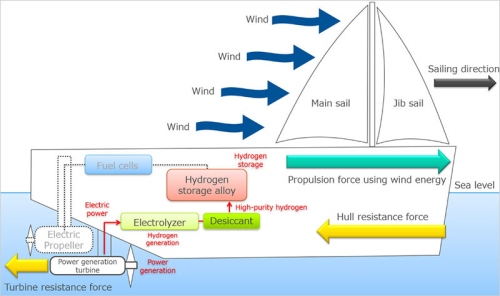 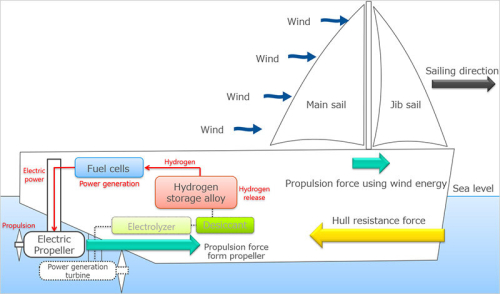 The next step will be a demonstration using a larger vessel.

Getting rid of marine diesel with its pollution, noise, unreliability and general hassle would be wonderful!

Yachties hate having to switch a diesel engine on.

Silent clean fuel cells would be a wonderful new chapter.

Looks very complicated to me.
Lot to be said for battery electric or just diesel.
They are trying to pick up the excess power of very windy days and save it as H2.
Would they be better just going faster and / or using batteries, or batteries and solar (if they have the deck space).
It is the typical battery vs H2 argument: batteries are more efficient, but H2 has higher storage capacity. Also, batteries are more developed.

I don't think you have had a look at how sailing ships operate now.

Systems like Oceanvolt use batteries to power the ship when charged, often using solar to get the charge in the battery.
It is way more silent and cleaner than diesel.

When there is wind, then they switch off the engine and with a modest reduction in their speed over ground they can recharge the batteries.

The limitations are of course that batteries can't provide a lot of energy, so if you want to be able to keep going noisy, smelly, polluting diesel has to be used.

In a marine environment diesels aren't very reliable either.

Replacing that with a fuel cell and hydrogen means that hopefully we will be able to get the best of both worlds, although of course it is not as efficient as charging a battery.

Like all engineering, it is a matter of balance

Make all sea ships electric final drive, then install fuel cells and a large buffer battery to provide the current.
As battery technology progresses, increase the capacity of the battery and use less H2.
At any time augment the ship with wind power directly or charge the ship's battery with wind power and solar power canopies as that technology develops and progresses.

Make the motor an alternator when under sail.