Testing electrified and autonomous vehicles in public passenger transit is the goal of the RABus collaboration project. In the cities of Mannheim and Friedrichshafen, RABus self-driving buses will be tested in regular urban road traffic. Researchers of Karlsruhe Institute of Technology (KIT) will accompany project work by studying demand, acceptance, and impacts.

The project is to result in a model concept for efficient public passenger transit with autonomous buses in Baden-Württemberg. The State Ministry of Transport will fund RABus with €7 million. 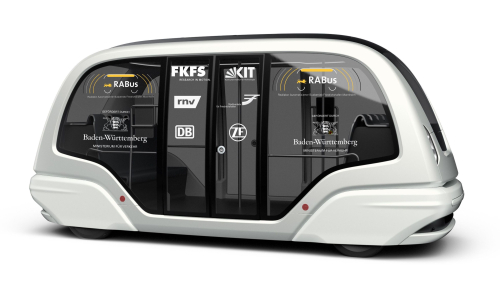 The RABus buses offer room for up to 22 passengers. Thanks to their compact dimensions, they can be integrated easily in urban traffic flow. The buses, made by 2getthere, feature a 2 x 18.4 kWh Li-ion system for a range of up to 50 km under normal conditions. Recharging of the Li-ion nano NMC cells takes 11 minutes to bring them from 30% to 80% SoC. (Photo: ZF)

Development, implementation, and tests of economically efficient and reliable operation of automated vehicles are of high relevance to future public passenger transit. Presently, automated vehicles in road-based public passenger transit are mostly operated at low speed. This results in longer driving times and reduces acceptance and utilization. RABus seeks to change this situation.

The cities of Mannheim and Friedrichshafen are planned to be used as real-world laboratories. There, an economically efficient public passenger transit system based on electrified and automated vehicles will be established by the end of 2023. The focus in Mannheim will be on mixed inner-city traffic in a new urban quarter. Work in Friedrichshafen will focus on interurban operation.

To ensure adapted and safe driving, the vehicles are planned to go with the flow of traffic at acceptable speeds both in the cities and outside. The buses will be made by 2getthere, a subsidiary of ZF Friedrichshafen AG. (ZF acquired 2getthere, which was founded in 1984, in 2019.) With their compact dimensions of 6 x 2.1 x 2.8 m, they can be integrated in urban traffic flow in a demand-driven and schedule-independent way.

The scientific part of the project covers research into acceptance, economic efficiency, and technical solution approaches.

RABus will be a real-world lab to produce useful data by operating several vehicles under real conditions. This goes far beyond mere demonstration operation.

Within RABus, IFV will analyze aspects of demand, acceptance, and impacts on road traffic. The researchers will evaluate the data measured during real operation and interview passengers prior to, during, and after use. The feedback will be incorporated in the design of future public passenger transport systems.

Moreover, the researchers will generate transport demand models for Friedrichshafen and Mannheim, which will include automated buses and be suited for simulating their efficient use. On this basis, future public passenger transport systems with autonomous busses will be conceived. In addition, a transport model will be developed that will use the data to identify other potentially suited regions in Baden-Württemberg.