Australia-based Syrah Resources has completed a bankable feasibility study (BFS) for expansion of its natural graphite AAM facility in Vidalia, Louisiana, as it continues to execute its strategy of becoming the first vertically integrated producer of natural graphite AAM (advanced anode material) outside of China.

The BFS confirms that 10ktpa of AAM production can be achieved via expansion of the existing plant and infrastructure within Syrah’s existing 25-acre industrial site. Syrah intends to initially expand natural graphite AAM production capacity at Vidalia to 10ktpa, and then increase in line with growing market demand. To this end, the BFS assessed both the initial market entry 10ktpa plant size, and a larger scale 40ktpa plant.

The BFS confirms strong positive economics for commercial scale natural graphite AAM production at Vidalia, with robust operating margins implied compared to current observed spot natural graphite AAM prices, which are arguably at the low point of the cycle. Vidalia vertically integrated with Balama presents a unique value proposition: scale; independence and localization with USA battery production; critical mineral security; and ESG auditability back to the graphite source. The completion of the BFS further enhances engagement with potential offtake customers, financiers, and Government, and represents an exciting milestone in the execution of our USA and vertical integration strategy, which commenced in 2016.

Syrah established this installed asset base to facilitate product qualification with potential customers, which requires demonstration of capability to produce natural graphite AAM that is representative of commercial-scale production. Syrah has invested US$56 million to date in de-risking market entry into the battery anode supply chain, including construction and operation of the existing asset base in Vidalia and technical product development. 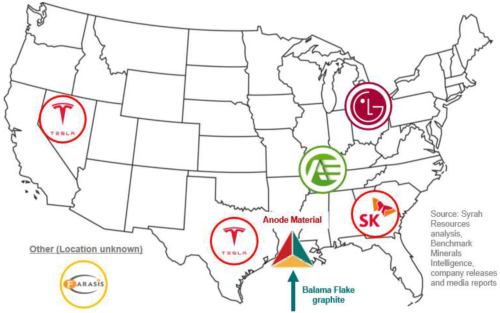 Location of Vidalia and planned/existing battery production capacity in the US.

It has already begun work on front-end engineering and design (FEED) for the anode material capacity, which it expects to complete in the first quarter of 2021, before beginning detailed design work.

Market intelligence firm Roskill noted that Syrah Resources is already a producer of natural flake graphite in Mozambique and has been developing spherical graphite intermediate products in the US, with its first battery-grade purified product achieved in July 2020. A move to downstream production of anode material would give it access to a higher value market and help it take advantage of the market’s desire for a non-Chinese and potentially more sustainable supply chain.

With commercial-scale production of spherical graphite currently limited to China, and concerns over the industry’s willingness to pay a premium for non-Chinese spherical graphite, the provision of downstream anode material could be more attractive.

In its recent report for the September quarter, Syrah Resources stated that its Mozambican Balama mine remained closed, following the temporary suspension of production in March 2020 with the effect of COVIID-19 on demand. However, production had already been significantly reduced by two-thirds from Q4 2019. The company was working to improve recoveries and decrease production costs before shutdown.

In Q4 2020 Syrah Resources achieved first production of AAM via toll processing of purified spherical graphite. It is unclear what role toll processing will play in future downstream production, Roskill said. Also as yet unclear is a timeline for mine restart and the capacity that could be reinstated. Balama has previously been operated on the economics of a very large-scale operation compared to most flake graphite facilities, previously taking the award for the largest production of any site outside China.