Toyota announced that it will preview a new mid-sized battery-electric SUV based on the forthcoming the e-TNGA platform for its European Battery Electric line-up.

Further details are to be announced in the coming months. At this stage, only a stylized silhouette and details of the platform architecture have been released. 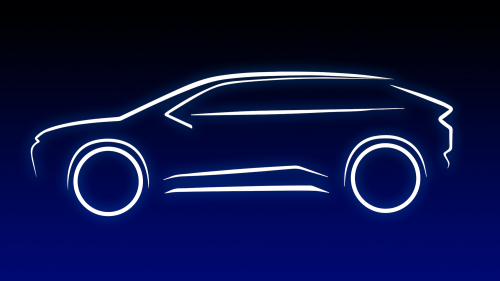 The un-named preview model will be based on Toyota’s new e-TNGA platform. The new platform is both highly versatile and easily adaptable for a range of product types. 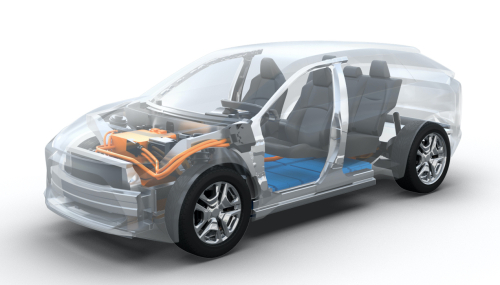 The basic architecture principle is that a number of key elements remain fixed while others vary. This approach allows variance in vehicle width, length, wheelbase and height.

e-TNGA can also be defined with front-, rear- or four-wheel drive and with a wide-range of battery and electric motor capacities to suit various vehicle types and usage profiles.

By using this versatile approach, the development time of different product variants can be reduced and individual models can be developed in parallel.

The first e-TNGA based model has already been developed and is being readied for production. Manufacturing will take place at Toyota’s ZEV Factory in Japan.

It will be interesting to see if they are using their 'miracle' pouch cell batteries. Awaiting details.

The video in the link is well worth viewing.

Not only are they going straight to an SUV configuration, which BEVs makers have avoided as the aerodynamics are tough on the range figures, but they say that they are on track for solid state batteries in a production car in the first half of this decade.

That is the first time I have heard them being that solid on what they think they can do, so progress must be good.

It will be interesting to see just what is the Toyota "Solid State" battery. Keiji Kaita who has said that there will be a prototype next year, has many patents originally from his work at Sumitomo Electric Fine Polymer. Suspect the battery will have a polymer electrolyte. Not sure about the anode or cathode.
SK Innovation is working on a Micropores-in-Macroporous Gel Polymer Electrolyte based on research by John Goodenough at UT (SK Innovation is a VW partner). So maybe both are near term possibilities.
You can read more about the Toyota Mid size BEV SUV in this presentation by Shigeki Terashi (picture on slide 33): https://media.toyota.co.uk/wp-content/files_mf/1559900303AimingtoPopulariseBEVs.pdf.

Toyota tell us that they have the prototype now, and were going to have presented it at the Olympics, but as that was cancelled due to covid they have delayed the presentation.

The electrolyte is a sulphide based one:
https://insideevs.com/news/435933/covid19-prevented-toyota-solid-state-batteries/

Toyota has been working on Sulfide ceramic electrolytes for over a decade (check patent US20120189918A1 - Sulfide solid electrolyte, this patent has been updated in the 2020 patent US10707518B2).
However, Sulfide ceramic electrolytes have some problems. Shirley Meng, UCSD discusses these problems in "Enabling Thin and Flexible Solid-State Composite Electrolytes by the Scalable Solution Process" (http://smeng.ucsd.edu/wp-content/uploads/acsaem.9b01111.pdf). She states:"However, of the various solid-state electrolyte (SSE) classes-polymers, sulfides, or oxides-none alone can deliver the combined properties of ionic conductivity, mechanical, and chemical stability needed to address scalability and commercialization challenges." Shirley Meng is working on flexible composite solid electrolytes.
In July, 2020 Keiji Kaita, executive vice president of Toyota's powertrain company, spoke with Automotive News" and said the company has a working prototype (https://www.caranddriver.com/news/a33435923/toyota-solid-state-battery-2025/).
Keiji Kaita also has a patent (US20200119317A1) which discloses a polymer based "Electricity storage device".
In the Insideevs article it states: "Toyota is working on a sulfur-based electrolyte" and "The main issue is that the electrolyte must be flexible since most anodes expand while charging and contract while discharging. " That sounds like a composite electrolyte.

Also in the Car and Driver article: Kaita notes that Toyota's breakthrough in this area might come from new materials or a new design. So sulfur might not end up being the solution Toyota is looking for in the long run.

If you look at the link that gryf provided -- https://media.toyota.co.uk/wp-content/files_mf/1559900303AimingtoPopulariseBEVs.pdf -- and look at slide 4, it seems that Toyota believes that more than 80% of their vehicles will still be powered by internal combustion engines in 2050 although most will be HEVs or PHEVs. According to their future plans, less 10% each will be BEV or FCEV in 2050.

It is my belief that the world would have largely moved beyond internal combustion engine powered private vehicles long before 2050 and that either Toyota will be building mostly BEVs or they will be minor builder of other vehicles or out of business.