Bosch plans to start full-scale production of SOFCs in 2024

Bosch plans to start full-scale production of distributed power stations based on solid oxide fuel-cell (SOFC) technology; hence its agreement to intensify its alliance with Ceres Power. Bosch is positioning itself clearly as a systems supplier for stationary fuel cells with its own value creation in the cell and stack segment.

Following a successful prototype construction phase, the two companies now want to press ahead, initially with the pre-commercialization process for stationary fuel cells. For SOFC systems, Bosch is aiming for an annual production capacity of some 200 megawatts. This is enough to supply around 400,000 people with electricity in their homes.

Bosch is planning to produce the stationary fuel-cell systems at its manufacturing sites in Bamberg, Wernau, and Homburg, as well as its development sites in Stuttgart-Feuerbach and Renningen, and will invest hundreds of millions of euros by 2024. 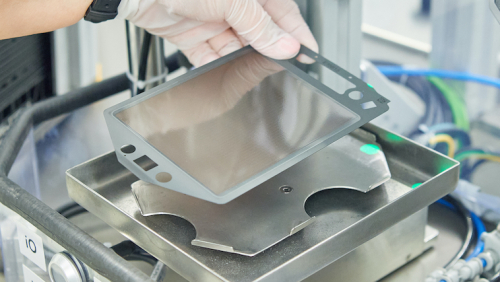 Solid oxide fuel cells at the Bosch location in Bamberg

One intended application of SOFC technology is in small, distributed, connectivity-enabled power stations, which can then be used in cities, factories, trade and commerce, data centers, and electric vehicle charging infrastructure. Bosch estimates that the market for decentralized power generation will reach a volume of €20 billion by 2030.

A total of more than 250 Bosch associates are now working in this promising new field—150 more than a year ago.

Since August 2018, Bosch and Ceres Power have been successfully collaborating in the field of fuel cell and fuel-cell stack development. As early as fall 2019, Bosch was able to start prototype production of its first fuel-cell systems in Germany; in January 2020, it acquired a stake of around 18% in the UK company. The alliance has now been extended to include the phases leading up to full-scale production in 2024. The agreements specify how Bosch will further use its alliance partner Ceres Power’s technology. 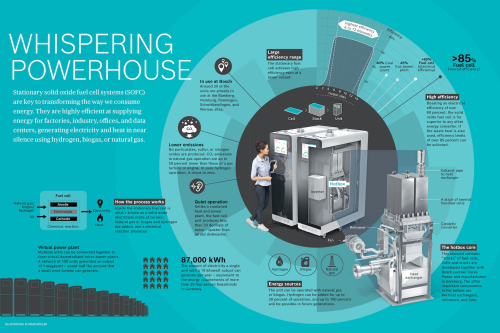 Pilot plants based on solid oxide fuel cells are already being successfully tested at various Bosch locations. The SOFC systems can be operated with eco-friendly biogas or natural gas.

Most excellent, use them on trains and ships as well.

Also the latest GE combined cycle gas turbines are 62% efficient (electric output) so the 60% electric output efficiency that Bosch claims is not that impressive but they are much smaller if you only need a small amount of power.

SOFCs with output turbine can exceed 70% efficiency, the grid is about 40%. Given the low cost of NG in the U.S. these could be used stationary in fast charge facilities. The waste heat can be used to heat/cool the Charger Diner.