Equinor and RWE have joined the NortH2 project, which aims to produce green hydrogen using renewable electricity from offshore wind off the coast of Netherlands of about 4 gigawatts by 2030, and 10+ gigawatts by 2040, kickstarting the hydrogen economy in Northwest Europe. 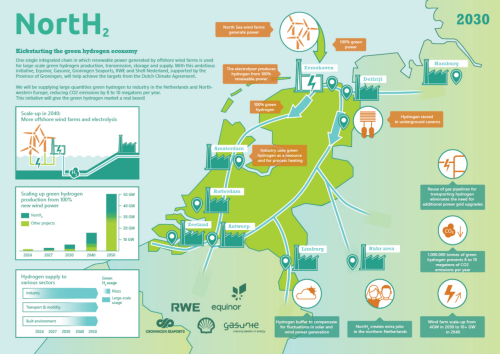 NortH2 was launched in February 2020, with Shell, Groningen Seaports Gasunie and the province of Groningen. The project will complete a feasibility study by 2021, with the aim to start project development activities in the second half of 2021.

The North Sea has a great potential for large-scale wind development, there is extensive existing natural gas infrastructure that is suitable for storage and large-scale transport of hydrogen, and there are large industrial clusters in the Netherlands and Germany as well as heavy-duty vehicle OEMs that could economically benefit from a first mover advantage.