Enerkem, with a group of strategic partners including major investor Shell, along with Suncor and Proman, and Hydro-Québec supplying green hydrogen and oxygen, and with the support of the Québec and Canadian governments, is proposing the construction of a biofuel plant in Varennes, in the Greater Montréal area.

Varennes Carbon Recycling (VCR) will produce biofuels and renewable chemicals made from non-recyclable residual materials as well as wood waste. The plant will leverage green hydrogen and oxygen produced through an 87MW electrolyzer, transforming Québec’s excess hydroelectricity capacity into value-added biofuels and renewable chemicals. VCR will be a major creator of quality local direct and indirect jobs during its construction and operation.

Enerkem’s technology enables the recycling of the carbon and hydrogen contained in non-recyclable waste and wood waste currently landfilled and burned. Enerkem’s proprietary thermochemical process enables the conversion of this carbon into biofuels and renewable chemicals, made from methanol, which is the project’s intermediary product. 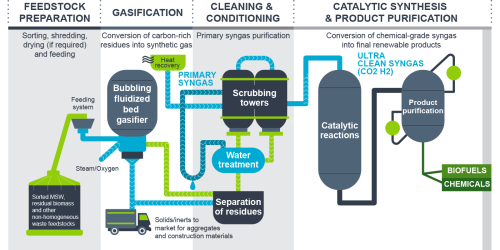 Enerkem gasifies the feedstock and then catalytically converts the resulting cleaned syngas into liquid methanol and then fuel-grade ethanol.

The proposed Varennes plant will support Québec's Plan pour une économie verte 2030 (PEV 2030), Québec’s energy policy, and is in line with the government’s desire to pursue the development of a circular economy less dependent on fossil fuel products (40% reduction by 2030). In addition to providing a second life to waste material, it will expand the overall supply of alternative fuels and increase biofuel production in Québec.