Toyota’s next generation fuel cell electric technology is now powering a new set of Class 8 heavy-duty trucks. Using the same fuel cell system as the all-new 2021 Mirai sedan that goes on sale this month, the engineers at Toyota Motor North America Research and Development have developed a set of production-intent prototype trucks that are being prepared to run drayage routes at the ports of LA and Long Beach to validate their performance, efficiency and drivability. 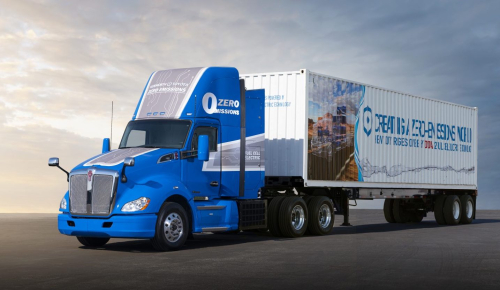 Designed to be flexible enough to meet the needs of a wide variety of OEM truck makers, the new fuel cell electric system in the latest prototypes has been adapted to a Kenworth T680 chassis.

A more compact hydrogen storage cabinet behind the cab houses six hydrogen tanks with the same capacity as previous prototypes while a new, more powerful lithium-ion battery helps smooth out the power flow to the electric motors.

In this configuration, the second-generation fuel cell system delivers more than 300 miles of range at a full load weight of 80,000 lbs., all while demonstrating exceptional drivability, quiet operation, and zero harmful emissions.

This is an important step in the transition to emissions-free heavy-duty trucks. Our first prototype trucks proved that a fuel cell electric powertrain was capable of hauling heavy cargo on a daily basis. These new prototypes not only use production-intent hardware, they will also allow us to start looking beyond drayage into broader applications of this proven technology.

Reducing airborne pollution at the Ports of L.A. and Long Beach is an important driver of this program. Toyota’s Environmental Challenge 2050 aims to almost completely eliminate CO2 emissions from vehicles, operations and the supply chain by 2050.

Converting the drayage trucks that currently serve these ports to electric drivetrains would move us closer to that goal.

Port fleet rollout. Toyota Logistics Services and Southern Counties Express each will receive a Kenworth T680 Class 8 truck powered by a Toyota fuel cell electric drivetrain. Both of these zero-emissions trucks will be used for drayage operations in the ports of Los Angeles and Long Beach. 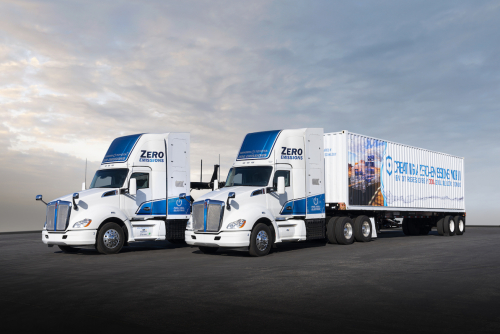 Development of the Kenworth T680 FCEV is part of a $41 million Zero and Near-Zero Emissions Freight Facilities (ZANZEFF) grant awarded by the California Air Resources Board (CARB), with the Port of Los Angeles as the prime applicant. CARB has awarded those funds to the Port of Los Angeles for the ZANZEFF project as part of California Climate Investments, a California initiative that puts billions of Cap-and-Trade dollars to work reducing greenhouse gas emissions, strengthening the economy and improving public health and the environment.

Contrast this progressive, step by step, improvement program and roll out with others fantastical claims both for long distance FCEV trucks and BEV ones.

As Toyota's video from a couple of years ago said, what truck drivers need is demonstrated rock solid reliability and low total cost of ownership.

Who better than Toyota to demonstrate those qualities?

low total cost of ownership...
TCO will drive the deal, some may talk green
but it is money that counts.

I do not believe that you need fuel cell technology for drayage use. The current battery technology is sufficient to build tractors for yard work and short haul drayage. Maybe their is a place for fuel cells in long haul trucking but in-town or last-mile delivery and drayage can be down at lower cost (capital, power and maintenance) and more efficiently using Battery Electric. And if the solid state lithium metal QuantumScape batteries prove out with fast recharge maybe even long haul trucking can be Battery Electric.

Thanks to Davemart for the video link on QuantumScape in the previous article: https://www.youtube.com/watch?v=dGnPSkXKb0I&feature=youtu.be

It is long but worth watching and give you hope for the future.

'I do not believe that you need fuel cell technology for drayage use. The current battery technology is sufficient to build tractors for yard work and short haul drayage. '

It depends how short is short, and the utilisation pattern as very short haul stuff can have multiple drivers, so it is uneconomic to hang around charging.

They ran the same calculations that Toyota have done for trucking in Germany for trains, and in the vast majority of cases fuel cells came out ahead.

Over anything but very long distances FCEV trucks can be used just like a diesel but with zero emissions.

And since the FCEV also cleans the air, I am not sure why you would have a preference for batteries.

Why fix it if it ain't broke?

You asked why fix it if it ain't broke. To that I would say, why find a more expensive solution if it is not required? The main problem with fuel cells compared with batteries that they require hydrogen that is either made with natural gas or with electrolysis. If made with electrolysis, it requires approximately twice the electric power as that required to charge batteries. Also, as the total cost of ownership is more with a higher capital cost, higher maintenance cost, and higher energy cost, the same amount of capital will buy more battery electric vehicles than fuel cell vehicles.

Where did this crazy idea that a fuel cell vehicle clean the air ever come from? The amount of air that would be affected is miniscule and the only way that would work is because the input air is filtered. You could just as well argue that a Tier 4 diesel engine cleans the air and there is more air flowing through the diesel.

I'd rather buy one of these from Toyota than Nicola.

You seem to imagine that TMC, Daimler, Hyzon and others are all innumerates.

They have run the figures, and the far higher energy density of hydrogen even with the containment etc make the economics far better than BEV for the application, and increasingly so as the cost of hydrogen from renewables continues its downward path, with two fundamental, long sustained, and with no reason to think it will not carry on into the future, the falling cost of renewables and the falling cost of electrolysers.

Here is one analysis showing 'Why FCEV for trucks'

' Results show that the majority of duty cycles could be met with a 200kW fuel cell and battery packs of 32kWh or lower capacity. Only a small reduction in payload carrying capacity is required and
refueling times are estimated at less than 25 minutes, thereby enabling high utilization zero‐emission freight movement.
For the freight industry, our study confirms that fuel cell electric powertrains offer four key advantages over a pure battery powertrain: longer range, greater power, more payload capability, and faster
refueling leading to high utilization of the truck asset.
Although fuel cell electric vehicles are currently more expensive to operate than battery electric and internal combustion commercial vehicles, they are set to become much lower cost as manufacturing
technology matures, economies of scale improve, hydrogen fuel costs decline, and infrastructure develops. Based on real cost data from the hydrogen and fuel cell industry, expert analysis shows that
fuel cell electric vehicles can be the lowest cost solution, beating both other low‐carbon and fossil‐basedsolutions for certain commercial applications like heavy‐duty transport.i'
https://nacfe.org/wp-content/uploads/2020/06/Informational_NACFE_BPS_Truck_White_Paper_Download.pdf

'Where did this crazy idea that a fuel cell vehicle clean the air ever come from?'

!! From the figures, and extensive testing, How come you are posting without the least effort to check the basic facts?

A diesel/petrol engine does some filtering, down to around 5 microns, but not the really nasty stuff at 2.5 microns. And of course they kick out plenty more of their own.

Here is a video of testing carried out by UCL:
https://www.youtube.com/watch?v=ormfLJmWGC8

As they say: 'A mobile air filter on wheels'

And a more in depth view:
https://www.youtube.com/watch?v=tjGy4vN_3pY

Well, you helped me understand where the crazy idea that a fuel cell vehicle cleans the air ever came from. As I suspected, it is just filtration of the intake air which would have a miniscule effect on the environment. As the fuel cells do not use more air than needed, you could well make the argument that a Tier 4 diesel would do a better job as the air flow is considerably higher because the diesel always runs with excess air and in dirty environments the the output exhaust of a Tier 4 has been measured to be cleaner than the input air. However, I would not make an argument for using either one for cleaning the environment.

As for the other arguments, you still do not need fuel cell vehicles for short haul trucking which includes drayage, in town deliveries, etc. Also, 200 kW steady state power is not going to work for long haul trucking in the US as our trucks are larger and in the west the speeds are higher (80 mph or almost 130 kmph in Utah).

Some people on this site seem to have higher opinion of Toyota than I do. I think that they got a good start some 20 years ago with their hybrid vehicles but now they are technologically behind on manufacturing practical electric vehicles.

mahonj stated that he would rather buy a fuel cell truck from Toyota than Nicola. Maybe. I am not sure whether Nicola is going to make anything other than a few prototypes. I did get a chance to look at their first prototype but I am not sure whether it was fully functional or not. They were moving out of a building in Utah that my company was moving into. I know that Arizona gave them some sort of sweetheart deal that they may come to regret but time will tell.