A team led by Professor Cheong Ying Chan at Hong Kong University Of Science And Technology (HKUST) Energy Institute, has proposed a novel cathode design concept for lithium-sulfur (Li-S) battery that substantially improves the performance of this kind of promising next-generation battery. A paper on their work is published in the journal Nature Nanotechnology.

Our cathode structure shows improved performances in a pouch cell configuration under high sulfur loading and lean electrolyte operation. A 1-A-h-level pouch cell with only 100% lithium excess can deliver a cell specific energy of >300 W h kg−1 with a Coulombic efficiency >95% for 80 cycles. 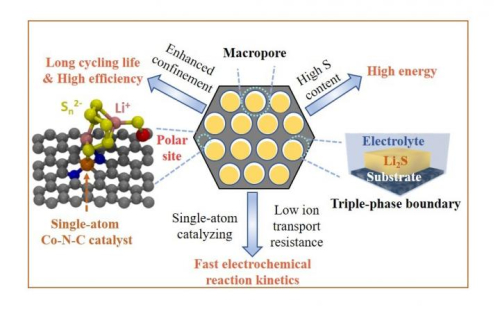 While exciting results on Li-S batteries have been achieved by researchers worldwide, there is still a big gap between lab research and commercialization of the technology on an industrial scale. One key issue is the polysulfide shuttle effect of Li-S batteries that causes progressive leakage of active material from the cathode and lithium corrosion, resulting in a short life cycle for the battery. Other challenges include reducing the amount of electrolyte in the battery while maintaining stable battery performance.

Their highly oriented macroporous host can uniformly accommodate the sulfur while abundant active sites are embedded inside the host to tightly absorb the polysulfide, eliminating the shuttle effect and lithium metal corrosion.

By bringing up a design principle for a sulfur cathode in Li-S batteries, the joint team increased the batteries’ energy density and made a big step towards the industrialization of the batteries.

We are still in the middle of basic research in this field. However, our novel electrode design concept and the associated breakthrough in performance represent a big step towards the practical use of a next-generation battery that is even more powerful and longer-lasting than today’s lithium-ion batteries.