Wear and tear from brakes, tires and road surfaces will soon overtake car exhaust fumes as the leading source of fine particles released into the air by road traffic, according to a new OECD report. Heavy electric vehicles with long-distance batteries could compound the problem even as they slash emissions from engine exhaust. 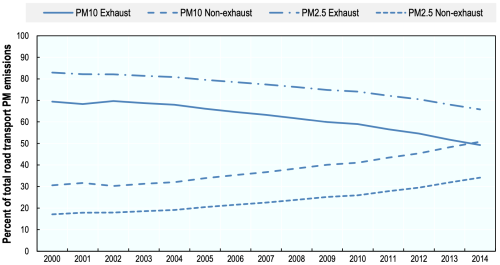 The findings in Non-exhaust Particulate Emissions from Road Transport: An ignored Environmental Policy Challenge also suggest that electric vehicles should not be exempted from tolls and congestion charges aimed at reducing road traffic emissions.

Instead, road traffic regulations should consider both exhaust and non-exhaust emissions from all vehicles and should take into account factors such as vehicle weight and tire composition. Policy makers should also favor measures that reduce driving distances, limit urban vehicle access and encourage public transport, walking and cycling.

Exposure to airborne particulate matter (PM) is associated with acute respiratory infections, lung cancer, and chronic respiratory and cardiovascular diseases. Road traffic is behind a quarter of PM2.5, the most damaging type, in urban areas yet only exhaust emissions of PM are regulated. No standards exist for measuring or regulating non-exhaust PM emissions.

As particulate matter emitted from exhaust sources decreases with the uptake of electric vehicles, the majority of PM released into the air by road traffic could come from non-exhaust sources as early as 2035.

The amount of non-exhaust particulate matter a vehicle emits is determined by many factors, including vehicle weight, driving styles, the material composition of brakes, tires and roads, and the amount of dust on road surfaces.

The report finds that the total amount of non-exhaust particulate matter emitted by passenger vehicles worldwide is likely to rise by 53.5% by 2030.

These findings underline the need to establish standardised approaches to measuring non-exhaust particulate matter and to develop a better understanding of how factors like vehicle characteristics influence the amount of PM generated, the report says.

As I have mentioned many times before, EVs will not make the particle problem go away. It could even be worse...