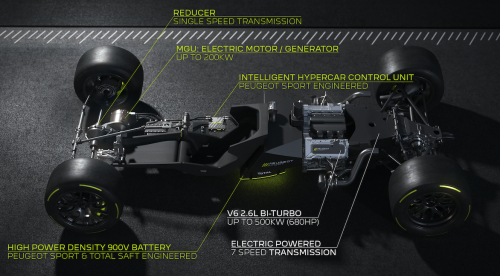 PEUGEOT Sport leveraged its experience of endurance racing (V12 and V8 PEUGEOT 908s) and that of PSA Motorsport in the FIA World Rally Championship (four cylinders) to develop a new 2.6-liter, twin-turbo, 90-degree V6. Positioned behind the driver, this 500 kW / 680 hp power plant will tip the scales at 165kg and drive the rear wheels.

The architecture of the PEUGEOT HYBRID4 500KW powertrain is the result of a highly-detailed brief shaped by the new FIA WEC regulations. We initially considered a single turbo, but that would have prevented us from achieving our engine’s center of gravity target. A twin-turbo V6 block offers the best trade-off between technology, weight, packaging of the engine’s ancillaries, reliability and performance.

The robotized sequential seven-speed (plus reverse) gearbox will be controlled by steering-wheel-mounted paddle shifters, and the PEUGEOT Sport-developed brake- by-wire system will also be managed electronically. The driver will be able to adjust the level of engine-braking generated by the electric motor under deceleration and the force applied by the pads to the braking discs to achieve the optimum electric regenerative / hydraulic braking split.

Optimal energy management, both under acceleration and during energy recovery (capped by the regulations at 200 kW), will consequently be key to the car’s performance and efficiency.

PEUGEOT Sport’s Hypercar will use prototype cooling fluids and engine / gearbox lubricants tailored by Total for intensive use and long life across a wide range of temperatures. Total has also developed special greases and oils that are evolutions of formula derived from its experience in motorsport. Total engineers will attend races as an integral part of the team, to take and analyze samples and to monitor the status of the car’s assemblies over time.

The PEUGEOT Sport-conceived front-mounted 200 kW motor generator unit will drive the front wheels and benefits from the team’s experience of developing electric motors and management systems for production cars.

The motor generator unit will be equipped with a lightweight, high-efficiency single- speed transmission and a latest-generation inverter to transfer battery power to the motor. It will have the capacity to use all the energy available in the battery instantly thanks to the powertrain’s energy management system strategies. PSA Motorsport’s experience of the WRC and Formula E will contribute to the development of the software employed to manage the computer and energy systems [braking energy recovery, power under acceleration, anti-lag system, reduced fuel-consumption].

900V battery. The high-density, high-power and high-voltage battery (900 volts) was developed jointly by PEUGEOT Sport and Saft, a Total subsidiary. With more than 10 years of experience in F1 and based on PEUGEOT Sport specifications, Saft’s engineers selected the best type of cells for the battery, which favors power over energy density, consistent with the needs of endurance racing.

As one of the keys of the car performance, the battery will be completely integrated inside the car and in the powertrain’s energy-management process.

The main parameter will be to optimize how the energy stored in the battery is used. To achieve this, you need an extremely short charge-time combined with high-capacity storage cells to form a package that enables maximum power to be delivered as rapidly as possible. The most competitive solution resides in the management of charge optimisation and the amount of power available in real time.

The new battery will be located in a carbon casing inside the car’s monocoque structure, behind the driver and underneath the fuel tank. It has been designed to combine optimal durability with consistent performance in races of up to 24 hours and even beyond. Total is responsible for the homologation of the battery which will be assembled in a new workshop at PEUGEOT Sport’s Versailles-Satory base, near Paris.

Racing operation. Although the internal combustion engine delivers 500 kW (680 hp) and the motor generator unit has a capacity of 200 kW, the FIA regulations set a maximum power output of just 500 kW during races. To adapt to the different situations in competition, the LMH powertrain functions as follows:

The following exceptions are covered by the regulations, however:

As required by the regulations, the Hypercar will be equipped with specific sensors to monitor and transmit the power levels measured at all four wheels to the FIA in real time to guarantee the maximum output specified by the Balance of Performance (BoP).

Before the track-testing program begins at the end of 2021, PEUGEOT Sport and Total will continue their engineering, which is expected to see the powertrain run on the bench and simulator in the course of the first half of 2021.