Grön Fuels, LLC’s renewable diesel and jet fuel option facility at the Port of Greater Baton Rouge is based on Topsoe’s proprietary HydroFlex hydrotreating and H2bridge hydrogen technologies, including an option to capture ~1 million tons per year of bio-CO2 for carbon sequestration in suitable deep saline aquifers located below the project site.

HydroFlex is Topsoe’s technology for hydrotreating renewable feedstocks. Unit design and catalyst selection is tailored to the specific demands of a refinery business, resulting in high-grade gasolines, jet fuels and diesels. 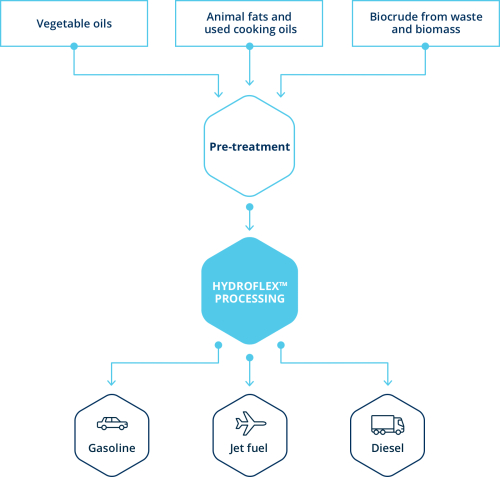 H2bridge is a circular solution that allows the replacement of external fossil feedstocks with renewable LPG or naphtha to produce hydrogen. H2bridge fully integrates with HydroFlex.

Following the expected completion of the first phase of the complex in 2024, the plant will produce 60,000 barrels per day of renewable diesel, including a permitted jet fuel option.

The integration of the fully proven H2bridge hydrogen technology with the HydroFlex technology enables Grön Fuels to produce renewable bio-hydrogen equivalent to the production of a 1,000 MW hydrolyzer plant at a fraction of the cost. The design flexibility to include bio-carbon capture and sequestration (CCS) to the project is added to pursue negative carbon intensity renewable fuel production.

Bio-hydrogen not utilized for renewable diesel production will be made available by Grön Fuels for purchase by third parties for lowering the CO2 emissions of power production, industrial processes, or transportation and can be shipped by the ~600 miles / 1,000 km of hydrogen pipelines operational and located near Grön Fuels’ site.

Grön Fuels worked collaboratively with Topsoe to design the facility to be able to manufacture renewable arctic diesel with an additive-free -40 degrees cloud point.

The facility will produce renewable diesel from non-fossil feedstocks such as soybean and canola oils, distillers corn oil, tallow, used cooking oil, and feedstocks of the future such as bio-crudes. The low-carbon fuels produced can directly substitute conventional fuels in cars, trucks and airplanes, while utilizing existing fuel storage tanks and infrastructure such as long-haul pipelines.