This contract comes on the heels of the company delivering a prototype Compact Artillery Power System (CAPS) for field-testing to the US Army PM (program manager) for Towed Artillery Systems. The company was also recently named a runner up in the Army xTechSearch Innovation Combine, a competition sponsored by the Army Future’s Command to find innovative solutions to scalable power and energy solutions.

The Small Tactical Power Generators will be just one fifth the size and weight of today’s currently fielded generators, and can increase fuel efficiency by up to 30% thanks to our patented thermodynamic cycle, while being optimized to run on heavy fuel including JP8. The scalable nature of the X-Engine will enable LiquidPiston to grow and tailor our ground power platform to meet the changing needs of the US Army as well as commercial partners.

Military power and energy demands are increasing exponentially, yet currently fielded generators operate on old technology, making them extremely big and heavy, as well as not as fuel efficient as they could be. The Small Tactical Power Generators operate on easily sourced military fuels, such as jet fuel, JP8, or diesel.

The US Army needs a modular system that is ultraportable and reduces the logistical footprint of its power source. LiquidPiston’s Small Tactical Power Generators provide more than an 80% reduction in weight and an almost 70% reduction in size when compared to the generators currently in use.

The smart electronics that enable hybrid electric configurations is an added plus of LiquidPiston’s generators. These generators deliver on the need for hybrid features that allow generators to run at optimal efficiency points, and offer silent operation periods, drawing electric power from the battery.

The need for small, lightweight, efficient power is important to increase mobility of US Army systems. Research in engine technologies, can potentially transition into more mobile power systems in the future. The Small Tactical Power Generator platform can be used by the Army for a broad array of war fighter needs from camp support to communications systems to computerized weaponry.

For example, CAPS, the 2 kW diesel prototype genset LiquidPiston delivered to the Army PM for Towed Artillery Systems, is being tested to power the M777 Howitzer’s Digital Fire Control System (DFCS) to address the Army’s need to extend mission duration and effectiveness by increasing logistics capacity for ammunition and other critical supplies by reducing fuel consumption and the volume and weight currently taken up by larger, heavier generators. 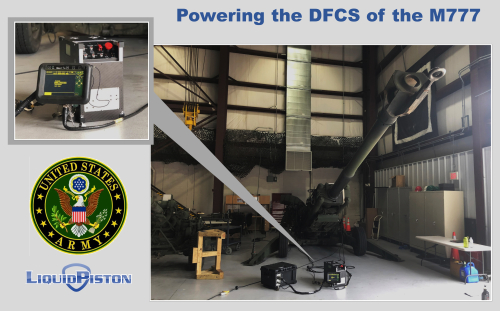 This generator can also eliminate the need for idling trucks and other vehicles as a makeshift generator when running idle, which causes a massive waste of fuel and excessive noise that could give away a soldiers’ position. The CAPS system, when combined with a 6T Li-ion battery, provides up to 5 hours of silent operation for each hour of generator operation.

Initial testing of the CAPS generator with the M777 Howitzer to power the Digital Fire Control System was successful. The hybrid electric option will be increasingly important as military equipment, both tactical and non-tactical, continue to be electrified and computerized, and there is a growing need for compact, efficient, and high-quality DC as well as AC electric power generation. At just 1.5 cubic feet, and 41lbs, and demonstrated capability to run and operate on Jet A / JP fuel with rapid starting capability, the CAPS system offers a substantial increase in capability to the Army.