Solid Power, a developer of all solid-state batteries for electric vehicles, announced that its Louisville, Colo. facility is producing 20 Ah multi-layer all solid-state lithium metal batteries on the company’s continuous roll-to-roll production line. 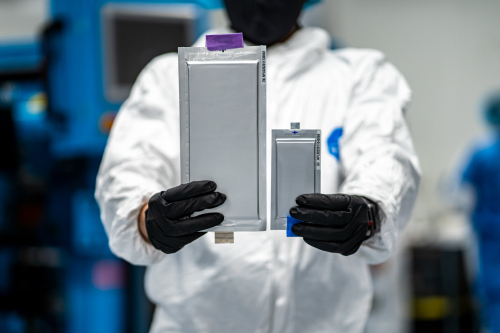 The 20Ah cells are currently being produced to validate large-format cell production processes in partnership with its automotive partners. Solid Power anticipates entering the formal automotive qualification process in early 2022 with even larger capacity all solid-state battery cells.

Solid Power has shown that our all solid-state cell design can be produced using scalable processes on industry standard lithium-ion equipment, and early multi-layer prototype cells using a highly conservative cell design have already exceeded the energy performance of today's lithium-ion cells. Proof of successful scale-up is key to realizing the potential of any next-generation battery technology, which is why lithium-ion roll-to-roll compatibility has been our mission since day one.

Solid Power has extensive partnerships with both BMW and Ford to jointly develop all solid-state batteries. The company is backed by prominent investors including Samsung, Hyundai, Ford, Volta Energy Technologies and Solvay.

Solid Power has also demonstrated even more impressive results with the company’s latest electrode compositions, which will move to the production line in 2021, including:

The transition of Solid Power’s new electrolytes, binders and electrode designs to the company’s continuous roll-to-roll production line will result in further improvements to specific energy, energy density, cycle life and charge rates. These improvements will translate into increasingly larger capacity cells culminating in full-scale cell demonstration by the end of 2021, the company said.