Almost every day there is a new announcement about hydrogen fuel cell electric trucks. Even with all the information, there are a lot of unanswered questions. We published this report to help make sense of hydrogen for commercial freight movement.

Key findings from the report include: 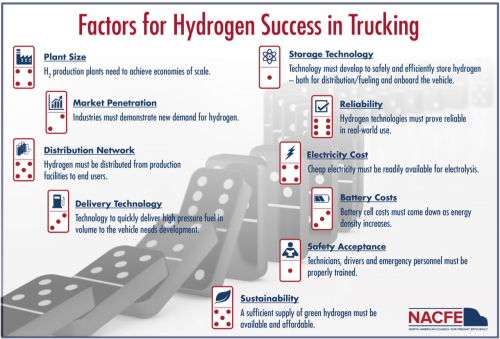 While hydrogen fuel cell technology is very promising, we know that widespread adoption will take time. Many factors will influence this, including emissions regulations, infrastructure, hydrogen availability and total costs of ownership. Buses and trains will likely be some of the first applications to transition to hydrogen, with the Hydrogen Council predicting that heavy- duty trucks will fall further out on the curve with about 2.5% of hydrogen adoption in 2030.

The report also offers fleets some recommendations on how to proceed with hydrogen fuel cell electric truck exploration: 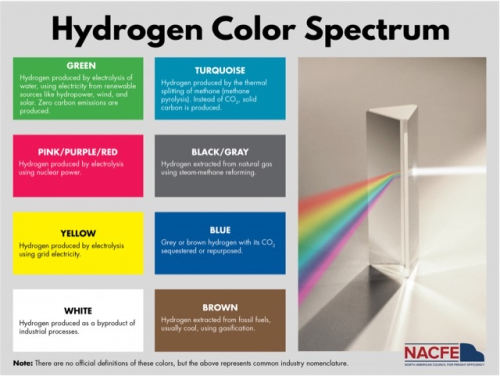 With an abundance of new research and company announcements in the hydrogen truck space, this report offers not only a way for the readers to make sense of the opportunity, but also provides a comprehensive set of resources for those who wish to explore the subject further. The report contains 101 figures and 230 references. Much more material exists but these are the reference and figures the NACFE team believes helped put hydrogen fuel cell electric heavy-duty tractors in perspective. NACFE is also available for discussions on this report with the industry and beyond.

The North American Council for Freight Efficiency (NACFE) works to drive the development and adoption of efficiency enhancing, environmentally beneficial, and cost-effective technologies, services, and operational practices in the movement of goods across North America. NACFE provides independent, unbiased research, including Confidence Reports on available technologies and Guidance Reports on emerging ones, which highlight the benefits and consequences of each, and deliver decision-making tools for fleets, manufacturers, and others.

"The future acceleration of HFCEVs is likely not about the vehicles and fueling but resides mostly on the creation and distribution of the hydrogen itself.​​"
For sure. And as far as setting up the refueling infrastructure is concerned, green hydrogen, blue hydrogen, and gray hydrogen are all the same. Indeed, gray hydrogen should be used first because it’s already here and can easily help us set up and test the new delivery network. Once we have it in place and things are working, we can then shift to blue hydrogen and ultimately to green. This is the sound way of doing things and the way we’ve done things before. So stop conflating the source of the hydrogen with the means of delivering it. One has nothing to do with the other. Arguments against the source of hydrogen should not get in the way of us setting up a safe and efficient way to deliver it to those that need it.