The first successful trial delivery of advanced cellulosic ethanol marks the start of the long-term cooperation between OMV, the integrated, international oil, gas and petrochemicals company headquartered in Vienna, and AustroCel Hallein GmbH. The Hallein-based bioethanol plant has an annual capacity of up to 35 million liters (9.2 million gallons US), making it the world’s largest bioethanol plant based on wood.

In the first year AustroCel Hallein will supply more than 1.5 million liters (400,000 gallons US) per month of second-generation bioethanol to OMV.

Bioethanol from Hallein will be produced exclusively from cellulose scrap, making it exceptionally environmentally friendly as no food or animal feed is used in the process. The bioethanol is extracted from the wood sugars left over in cellulose production before being fermented and distilled. 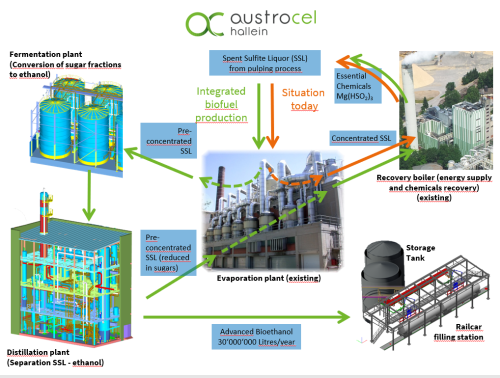 This means that the bioethanol from AustroCel Hallein falls under the category “advanced biofuels”, allowing it to be added to gasoline fuels in the future.

Substituting fossil fuels will save around 45,000 metric tons of CO2 a year. This product will thereby help reduce the carbon intensity of the OMV product portfolio and aid in meeting OMV’s 2025 Sustainability Targets.

AustroCel GmbH has invested around €42 million in the new bioethanol plant. The plant will operate at full capacity in January 2021, when regular deliveries of bioethanol to OMV begin.

Background. A number of directives regulate the use of biofuels in the EU. Several binding targets were laid out in 2009/28/EG, the EU’s 2009 Renewable Energy Directive (RED): to fulfil 20% of its total energy needs (power, heating and transport) with renewables, along with a minimum of 10% of transport fuels from renewable sources.

AustroCel Hallein GmbH is the market leader in China for textile fibers from coniferous wood, with total revenue of around €130 million. It produces up to 155,000 metric tons of viscose pulp in its bio-refinery in Hallein, Austria, as well as 100 GWh district heating and 100 GWh green power. This allows the Hallein-based high-tech firm not only to power its own manufacturing operation with cleaner energy, but also to provide green electricity to 25,000 households and district heating to 10,000 homes.