DOE: Adjusted for inflation, the price of gasoline in 2019 was similar to the price in 1929

The average annual price of gasoline has fluctuated greatly over the past several decades, but when adjusted for inflation (constant dollars), the price of gasoline in 2019 was only nine cents higher than in 1929, according to the US Department of Energy (DOE).

The graph below shows the effect of the oil embargo in the early 1980s. From 2002 to 2008, the price of gasoline rose substantially, but then fell sharply in 2009 during the economic recession.

In 2012, prices reached the highest level in both current and constant dollars but began a steep decline thereafter. 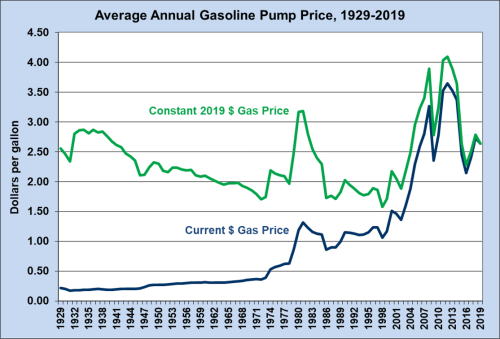 The only reason it's a parity is the ongoing taxpayer direct subsidies of approximately 16 billion a year. Without this boost, U.S. drivers couldn't afford to drive their ICE cars.