Van Hool, an independent Belgian manufacturer of buses, coaches and industrial vehicles, has shipped the first CX45E, a 100% battery electric coach, to the US. After an intense period of development and testing, the CX45E is now being commercially launched by Van Hool’s North American exclusive distributor ABC Bus Companies Inc. 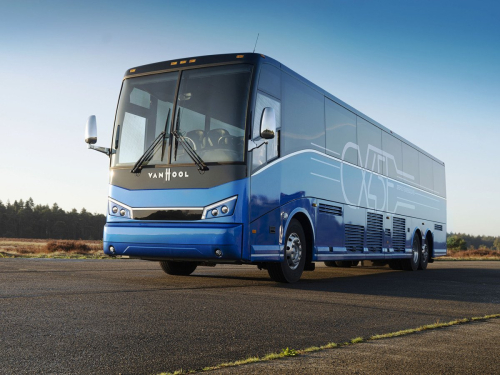 An additional ten units will be shipped to the US in the first half of 2021. The all-electric CX45E will then be delivered to two North American customers.

The CX45E is a fully electric powered coach for the North American market. Proterra was selected by Van Hool to supply the E2 battery technology and Siemens the traction system. (Earlier post.) The 100% electrically driven vehicle has a range of up to 500 km (310 miles), depending on the climate conditions and the route’s topography. The CX45E will mainly be used for commuting by groups of employees and/or regular passenger transport.

The CX45E was designed, developed and prototyped at the parent company in Koningshooikt, Belgium. The production-ready versions of the ten CX45E coaches planned for the first half of 2021 will also come from the Belgian factory. The vehicles will be driven from Koningshooikt to Zeebrugge for shipment to the US.

Van Hool is an independent Belgian bus, coach and industrial vehicle manufacturer. The company, which was founded in 1947, is based in Koningshooikt. The vast majority of units produced are destined for Europe and the US. Van Hool has around 4,100 staff worldwide, the majority of whom work at the production facilities in Koningshooikt (Belgium) and Skopje (North Macedonia).