Nuro has become the first company to receive a permit to deploy autonomous vehicles on public streets from the California Department of Motor Vehicles. This permit will allow Nuro vehicles to operate commercially on California roads in two counties near Nuro headquarters in the Bay Area.

Nuro said that it will soon announce its first deployment in California with an established partner. The service will start with a fleet of Prius vehicles in fully autonomous mode, followed by the Nuro custom-designed electric R2 vehicles. 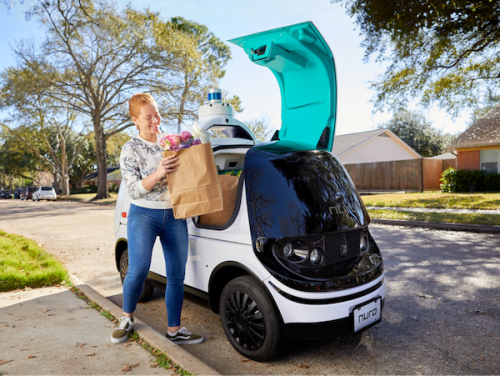 The California DMV has been working towards this milestone for nearly a decade. Since California adopted one of the first autonomous vehicle laws in the country in 2012, the DMV has steadily crafted a regulatory framework that last year included small delivery vehicles like Nuro’s.

This framework set up a three-stage permitting process for companies to move from testing with a safety driver, to driverless testing, and now finally, to commercial deployment.

In February, R2 became the first self-driving vehicle to obtain a USDOT exemption; in April, Nuro became the second autonomous vehicle company to receive a driverless testing permit in California; and in October the company announced that the R2 vehicles were being tested in three different states—with no drivers, no occupants, no chase cars.