The original aftertreatment system design—which was configured and tested by engineers from Achates Power, Faurecia, Aramco Services, Corning, Southwest Research Institute, and BASF—included a light-off SCR using gaseous ammonia, closely coupled to the engine in the engine compartment, and an under-cab ATS that included a DOC and SCR on filter.

However, during development, the project team was able to exceed the program expectation for engine-out NOx and exhaust temperature control in the catalyst warm-up mode and concluded that the tailpipe NOx targets can be met without the close coupled light-off SCR.

According to Fabien Redon, Achates Power’s CTO, the team made improvements to what Achates calls the Catalyst Light-Off operating mode, used while the SCR is not active. In that mode, Achates was able to reduce NOx below the original target and increase exhaust temperatures further. This accelerated the time to light-off the underfloor SCR on filter while minimizing the NOx emissions until that time, Redon said. That enabled the elimination of the close-coupled SCR and Ammonia injection system that was originally planned.

Configuration of the downstream underfloor ATS unit. The system is using a conventional non-heated urea injector prior to the SCR on filter. The SCR on filter is commonly used in passenger cars but not common in heavy trucks. Source: Achates Power

Testing on the FTP cycle showed a 90% reduction in NOx without the close coupled light-off SCR.

The OP engine is thus able to achieve these substantial and important reductions in NOx without any of the additional hardware being considered for conventional engines (cylinder deactivation, close-coupled SCR, heated DEF, etc.)

To reduce further the aftertreatment system cost and complexity, the project team looked at how to simplify the ATS further. The team studied a commercially available, current production aftertreatment system consisting of a DOC/DPF/SCR/ASC. A BASF aged-catalyst model, using engine turbine-out gas speciation, flow and temperature, predicts the engine + ATS will achieve 0.016g/bhp-hr NOx on the FTP cycle.

Three features of the new system design have the potential to substantially reduce compliance risk and cost.

Standard calibration is...ideal for feeding the SCR. [Its] typical temperatures [are] between 250 °C and 400 °C for efficient SCR function. [The] high floor [is] ideal for NOx reduction over proposed Low Load Cycle. Mild thermal exposure is easy on the aftertreatment. [The] temperature range [is] also ideal for DOC function with moderate precious metal loadings [for] low cost. [It has] ideal engine-engine out conditions to reach ULNOx. 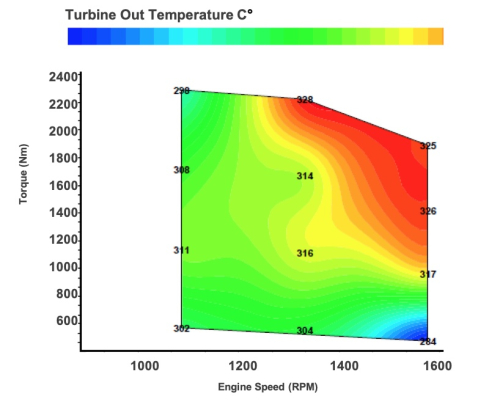 Currently, within the program the downstream ATS with DOC and SCRf continues to be used. Future designs can replace the SCRf with a more conventional DPF and SCR configuration to further reduce cost, complexity, and compliance risk.