Researchers at Oak Ridge National Laboratory (ORNL) have used neutron diffraction to provide noninvasive measurement of lattice strains inside components of a firing engine, thereby enabling the operando study of complex load states and thermal gradients throughout the solid materials. Their results are published in an open-access paper in Proceedings of the National Academy of Sciences (PNAS).

A modified commercial generator engine was mounted in the VULCAN diffractometer at the Spallation Neutron Source, and the lattice strains in both the cylinder block and head were measured under static nonfiring conditions as well as steady state and cyclic transient operation. The dynamic temporal response of the lattice strain change during transient operation was resolved in two locations by asynchronous stroboscopic neutron diffraction.

We demonstrated that operando neutron measurements can allow for understanding of how materials behave throughout operational engineering devices. This study opens a pathway for the industrial and academic communities to better understand the complexities of material behavior during the operation of internal combustion engines and other real-scale devices and systems and to leverage techniques developed here for future investigations of numerous new platforms and alloys. Experimental details. (A) Cross-sectional diagram of the air-cooled, single-cylinder engine with representative locations of gauge volumes highlighted in both the head and cylinder block. (B) Picture of the modified engine installed at the VULCAN beamline with instrumentation. (C) Diagram of experimental configuration (view from above), showing engine installed along the 45° plane bisecting incident beam and detectors (B1 and B2) with gauge volume located in the cylinder head. Camera lies along orthogonal 45° plane. Wissink et al.

The experiment was the world’s first in which a running engine was analyzed by neutron diffraction, using the VULCAN neutron diffractometer at the Department of Energy’s Spallation Neutron Source, or SNS, at ORNL.

The genset engine was a 196cc Honda GX200, with net power and torque of 4.1 kW and 12.4 N·m, respectively. The team chose this platform based on a number of coinsiderations:

Further, the geometric complexity presented by the cooling fins and internal geometry of the part made it a good test bed for the castability of an aluminum cerium (AlCe) alloy codeveloped by ORNL and Eck Industries. 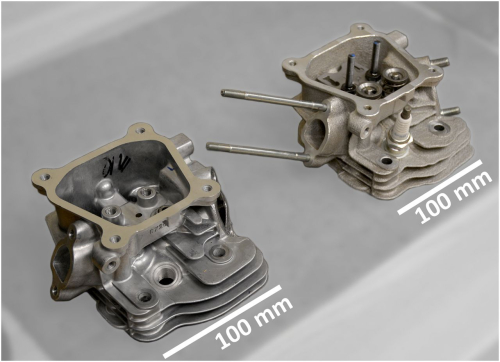 The AlCe alloy from which the head was produced was developed through a Critical Materials Institute project and is being positioned for high-temperature applications where aluminum alloys have long struggled to find applications.

The results of the research not only proved the hardiness of the unique alloy, but also demonstrated the value of using non-destructive methods such as neutrons to analyze new materials.

“Neutronic engine.” The experiment’s success has prompted ORNL to design a purpose-built research engine at industry-relevant scale for use in VULCAN. The capability is based on a two-liter, four-cylinder automotive engine, modified to operate on one cylinder to conserve sample space on the beamline.

The engine platform can be rotated around the cylinder axis to give maximum measurement flexibility. The engine is custom-designed for neutron research, including the use of fluorocarbon-based coolant and oil, which improves visibility into the combustion chamber. 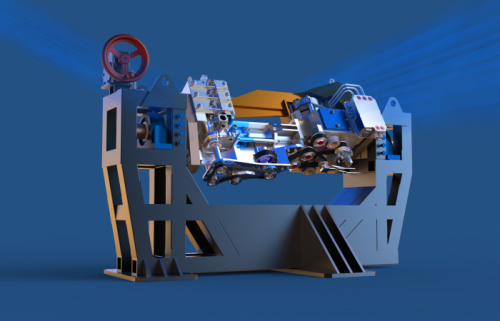 The capability will provide researchers with the experimental results they need to quickly and accurately vet new materials and improve high-fidelity computational models of engine designs.

Around the world, industry, national labs and academia are looking at the interface between turbulent combustion that happens in the engine, and the heat transfer process that happens through the solid components. Understanding and optimizing that process is really key to improving the thermal efficiency of engines.

But currently, most of these models have almost no in situ validation data. The objective is to fully resolve stress, strain, and temperature in the entire domain over all the metal parts in the combustion chamber.

The engine has been designed to ORNL specs and is currently undergoing final development with the Southwest Research Institute, and will be commissioned at DOE’s National Transportation Research Center, or NTRC, at ORNL before its first use at SNS, which is expected by late 2021.

Both the NTRC and SNS are DOE scientific user facilities, providing access to the most advanced tools of modern science to researchers around the world.

The VULCAN instrument at the SNS is ideal for the research, as it accommodates larger structures, said Ke An, lead scientist for the instrument. VULCAN is designed for deformation, phase transformation, residual stress, texture and microstructure studies. According to An, they are preparing the platform for the engine with a new exhaust system and other retrofits, including a new control interface for the engine.

Measurements from the engine will be fed into high-performance computing models being developed by scientists to speed breakthroughs for advanced combustion engines.

Researchers are interested in creating accurate predictions of phenomena such as heat losses, flame quenching and evaporation of fuel injected into the cylinder, especially during cold-start engine operations when emissions are often highest. The data from the engine are expected to provide new understanding of how the temperature of metal engine components changes throughout the engine over the course of the engine cycle.

The resulting high-fidelity models can be quickly run on supercomputers such as Summit, the nation’s fastest and most AI-capable computer. Summit is housed at ORNL as part of the Oak Ridge Leadership Computing Facility, also a DOE scientific user facility.

We’re bridging these fundamental science capabilities to applications and making measurements in real engineering devices and systems. The full measurement of strains and temperatures in engine components is something that has not been possible before. It’s crucial to have these data as either a validation or as a boundary condition for the HPC models that can be shared with researchers in the automotive industry.

The neutronic engine augments existing capabilities at ORNL and other national labs in the work to create more energy-efficient and ultra-clean engines, said Robert Wagner, director of ORNL’s Buildings and Transportation Science Division.

The ability to operate an engine in the neutron beamlines enables us to make unprecedented measurements under realistic engine conditions.

This capability adds to the one-of-a-kind resources that the national laboratories bring to advance the efficiency and emissions of combustion engines, such as the optical engine research at Sandia National Laboratories and with the Advanced Photon Source at Argonne National Laboratory.

The power of these unique resources is currently being aligned to solve the most challenging problems through a six-laboratory consortium called Partnership to Advance Combustion Engines, led out of the DOE Vehicle Technologies Office.