Researchers at the University of Oxford have developed a method to convert CO2 directly into aviation fuel using a novel, inexpensive iron-based catalyst. The catalyst shows a carbon dioxide conversion through hydrogenation to hydrocarbons in the aviation jet fuel range of 38.2%, with a yield of 17.2%, and a selectivity of 47.8%, and with an attendant low carbon monoxide (5.6%) and methane selectivity (10.4%).

The conversion reaction also produces light olefins—ethylene, propylene, and butenes—totalling a yield of 8.7%. These are important raw materials for the petrochemical industry and are presently also only obtained from fossil crude oil. An open-access paper on their work is published in the journal Nature Communications.

There are two ways to convert CO2 to liquid hydrocarbons; an indirect route, which converts CO2 to CO or methanol and subsequently into liquid hydrocarbons, or the direct CO2 hydrogenation route, which is usually described as a combination of the reduction of CCO2O2 to CO via the reverse water gas shift (RWGS) reaction and the subsequent hydrogenation of CO to long-chain hydrocarbons via Fischer-Tropsch synthesis (FTS). Jet fuel can then be obtained from the products after industrially recognized treatments such as distillation or hydro-isomerization. The second, direct route is generally recognized as being more economical and environmentally acceptable as it involves fewer chemical process steps, and the overall energy consumption for the entire process is lower.

… there are few reports of the direct catalytic conversion of CO2 to jet fuel range hydrocarbons. The key to advancing this process is to search for a highly efficient inexpensive catalyst, that can preferentially synthesise the target hydrocarbon range of interest.

… In this investigation, we report the preparation of iron-based catalysts using the Organic Combustion Method (OCM) and determined their catalytic performance for the direct and efficient conversion of CO2 to jet fuel range hydrocarbons. In brief, the Fe–Mn–K catalyst shows a CO2 conversion of 38.2% and selectivity to C8–C16 hydrocarbons of 47.8% with a correspondingly low selectivity for CH4 and CO. In addition, the process also shows a high molar production ratio of olefin-to-paraffin for C2–C4 hydrocarbons.

The Organic-Combustion Method (OCM), also known as the Solution Combustion Method, was developed to prepare highly active metal catalysts for a variety of processes. The method combines a solution of the required metal precursors as an oxidizing agent and a suitable organic fuel as a reducing agent. This redox mixture ignites upon heating to initiate a self-propagating exothermic reaction that sustains high temperatures for a period of time sufficient to decompose all the organic material. The final product is usually a crystallized material. 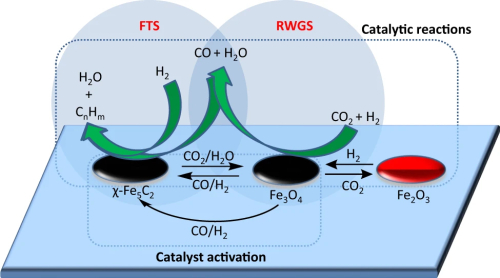 The CO2 hydrogenation to jet fuel range hydrocarbons process through a Tandem Mechanism in which the Reverse-Water Gas Shift reaction (RWGS) and Fischer-Tropsch synthesis (FTS) reaction are catalyzed by Fe3O4 and χ-Fe5C2 respectively. Yao et al.

The Oxford team first activated the Fe-Mn-K catalyst with syngas. The Fe3O4 catalyst precursor is fully carburized to χ-Fe5C2 during the catalyst activation (reduction) process, while Fe3O4 is partially regenerated from the oxidation of χ-Fe5C2 by CO2/water in the first hours of the catalytic reaction.

OK, you can do this but my question would be; is it more cost effective than using sunlight to convert CO2 to sugars via photosynthesis and then converting the sugars to alcohol and upgrading from there if needed? My guess that this is just a neat trick that is possible if you add enough energy to drive all of the reactions needed.

The “organic combustion method” the researchers used for generating jet fuel and the byproducts involved using the catalyst with hydrogen, citric acid and carbon dioxide
heated to 662°F.

The chemical process to achieve a series of outcomes is quite an impressive step.

I am curious about the other side of the = in that formula's equation?🤔
- What are all the byproducts which result from creating equivalent-to-'common'-fuel?
- What, if any, are this process's environmental factors which could be a key concern?

As we have learned about consequences; they have not been described by Oxford.

I would put water and CO2 into SOECs,
you get syngas to make gasoline, diesel or jet fuel.