In its technical support document for the rulemaking, EPA noted that:

The main conclusion of the impact analysis for the airplane GHG emissions rule is that it will result in no costs and no emission reductions. This is because the ICAO standards are technology-following standards and all manufacturers have products that either already meet the standards or have new products under development that will meet the standards by their effective dates.

The major effect of the adopted standards is to align with ICAO standards in order to provide a level playing field for US manufacturers and to prevent future airplanes from backsliding or incorporating technologies that will have an adverse effect on GHG emissions.

The standards address subsonic jet aircraft with a maximum takeoff mass (MTOM) greater than 5,700 kilograms and subsonic propeller-driven airplanes (e.g., turboprops) with a MTOM greater than 8,618 kilograms. Examples include larger business jets such as the Cessna Citation CJ3+; the larger commercial jet aircraft—the Boeing 777 and the Boeing 787; and larger civil turboprop airplanes such as the ATR 72 and the Viking Q400. These are same types of airplanes covered by the international aircraft CO2 standard.

In-production airplanes are new airplanes with designs that have already been type certificated by FAA and are already in production, and these airplanes will continue to be produced and sold after the effective date of the standards.

The EPA is adopting the ICAO CO2 metric, which measures fuel efficiency, for demonstrating compliance with the GHG emission standards. This metric is a mathematical function that incorporates the specific air range (SAR) of an airplane/engine combination (a traditional measure of airplane cruise performance in units of kilometer/kilogram of fuel) and the reference geometric factor (RGF), a measure of fuselage size. 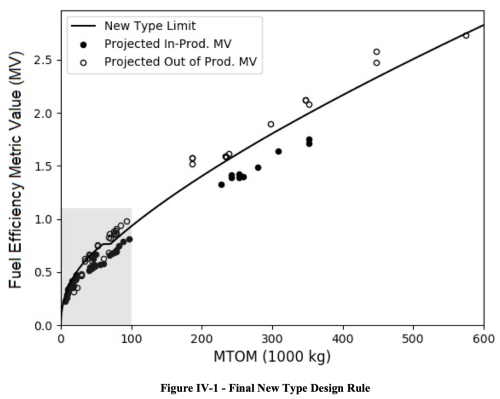 To measure airplane fuel efficiency, the EPA is adopting the ICAO test procedures whereby the airplane/engine SAR value is measured at three specific operating test points, and a composite of those results is used in the metric to determine compliance with the GHG standards.

US aircraft covered by the rule (this includes all domestic flights and international flights originating in the US) emit:

The ICAO standards were developed with input from EPA, the Federal Aviation Administration (FAA), and US and international aviation industries. Typically, three out of four aircraft manufactured in the US are sold overseas. These standards will help ensure consistent standards across the world, and most importantly allow US manufactured planes, such as commercial and large passenger jets, to continue to compete in the global marketplace.

Trying to make zero emission aircraft is foolish. Aviation companies should instead extract and sequester carbon from terrestrial sources. Surely that's cheaper and easier. In some northern european countries they are now moving towards banning air travel, which is truly unnecessary and stupid.