A fast, green and one-step method for producing porous carbon spheres—a component for carbon capture technology and for new ways of storing renewable energy—has been developed by Swansea University researchers. 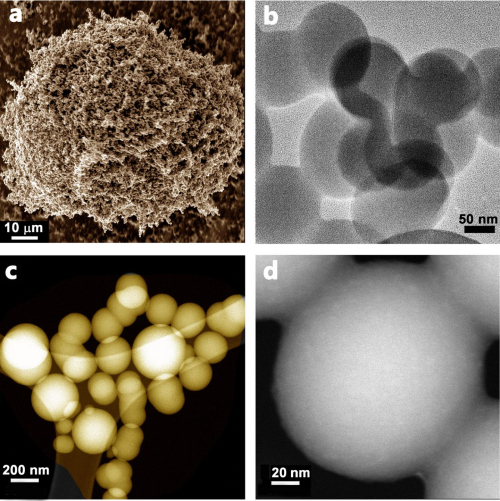 The method produces spheres that have good capacity for carbon capture, and it works effectively at a large scale. The research was published in the journal Carbon.

Carbon spheres range in size from nanometers to micrometers. Over the past decade they have begun to play an important role in areas such as energy storage and conversion, catalysis, gas adsorption and storage, drug and enzyme delivery, and water treatment. They are also at the heart of carbon capture technology.

Existing methods of making carbon spheres have drawbacks. They can be expensive or impractical, or they produce spheres that perform poorly in capturing carbon. Some use biomass, making them more environmentally friendly, but they require a chemical to activate them.

The work of the Swansea team points the way towards a better, cleaner and greener way of producing carbon spheres.

The team adapted chemical vapor deposition (CVD), which involves using heat to apply a coating to a material. Using pyromellitic acid as both carbon and oxygen source, they applied the CVD method at different temperatures, from 600-900 °C. They then studied how efficiently the spheres were capturing CO2 at different pressures and temperatures. They found that:

Would this be a good way of adsorbing hydrogen ?
Might be more use this way than taking out CO2 from the atmosphere.
IMO, the best way to do this is put the effort in not producing the CO2 in the first place.

We produce CO2 but we store it in empty NG wells.