The MAHEPA consortium announced that technology developed as part of the project has been successfully proven in flight on board the Hy4 fuel cell hybrid electric aircraft (earlier post).

The sixth-generation of hydrogen propulsion has been completely revised from 2016 to 2020, according to aviation requirements. As part of the test campaign launched in November 2020, there have been more than 30 take-offs and flights of up to two hours.

The experience with the sixth-generation drive and the modular structure of the fuel cell would support both air taxi applications with 1.5 hours flight duration as well as an aircraft with up to 40 passengers and a range of up to 2000 km (1200 miles). 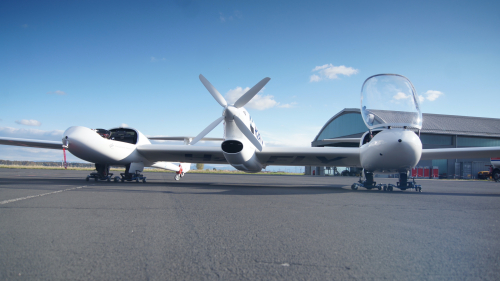 The Hy4 features a 120 kW electric motor and a fuel cell system with 55 kW continuous power.

The plane has received a Europe-wide “Permit to Fly” and is in Stuttgart until May 2021 for further testing.

The German Aerospace Center (Deutsches Zentrum für Luft- und Raumfahrt; DLR) presented the HY4 project at the International Trade Fair World of Energy Solutions in Stuttgart in 2015. In 2016, the aircraft made its first flight (earlier post).

In November 2020, despite the COVID19 repercussions and with all safety precautions in place, the Hy4 hydrogen powered hybrid-electric aircraft successfully flew from Maribor airport, in Slovenia.

With the renovated and optimized fuel cell system technology developed in MAHEPA and in strong cooperation with multiple national projects, the Hy4 became the most powerful hydrogen fuel cell driven aircraft yet made.

First qualification tests and data show that the full redundant Hy4 powertrain architecture allows an upscaling of the modular technology.

Appears to be 2 Pipistel Taurus self-launching sailplanes put together with a new center wing section with the propulsion system. A somewhat strange and not a very practical aircraft but it was probably a low cost way to get something that would fly. Note that Pipistel builds the Taurus in an battery electric self-launching version with a retracting motor and propeller. They also offer battery electric training and light sport aircraft. See: