Researchers from Trinity College Dublin have shed new light on the formation mechanisms of a rare earth-bearing mineral that is in increasingly high demand across the globe for its use in the green energy and tech industries.

Their discovery has important economic implications because there are no substitute alternatives to these rare earth elements (REEs), which are indispensable due to their ability to form small and very powerful magnets essential for smart devices and low-carbon energy generation (e.g., electronics, wind turbines, hybrid cars). A paper on their work is published in the ACS journal Crystal Growth & Design.

Most REEs are exploited in carbonatite deposits (the largest known carbonatite is the Bayan Obo in China), but scientists still debate how and why they form due to their complicated mineralogy, element composition and geologic history. 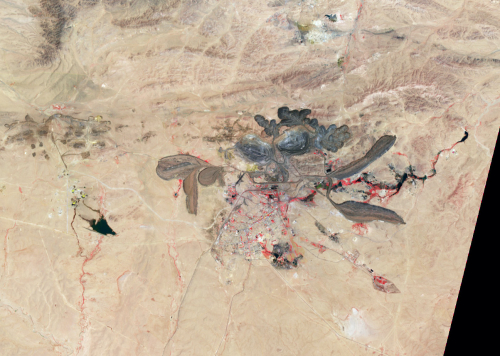 Bayan Obo in 2006. NASA’s Terra satellite acquired these false-color views of the mine in the Nei Mongol Autonomous Region. Vegetation appears red, grassland is light brown, rocks are black, and water surfaces are green. Two circular open-pit mines are visible, as well as a number of tailings ponds and tailings piles. Image: NASA.

There are more than 250 known REE-bearing minerals, but only three are economically viable and exploited commercially. Bastnäsite is likely the primary valuable mineral for REEs in the world and was the focus of the Trinity team’s study.

By considering how water containing REEs interacted with calcite, a mineral that is ubiquitous in nature and often present in hydrothermal environments, the team discovered a new pathway by which bastnäsite formed.

The fact that we need more REEs urges us to find out more about the geochemical behavior of these precious elements. Simply, we need to know a lot more about REEs, and how and why they form, if we want more of them.

The crystallization pathway we discovered reveals that in some rare earth-bearing deposits the origin of bastnäsite could be simply a consequence of the interaction of calcite with rare earth-rich fluids. This is not the only reaction that forms bastnäsite but the discovery is particularly important because calcite is found everywhere and is also the most stable calcium carbonate in nature. As a result, it suggests it should be possible to support the formation of bastnäsite under the right conditions.

This research was supported by funding from Trinity’s Provost PhD Awards, Science Foundation Ireland, Geological Survey of Ireland and the Environmental Protection Agency under the SFI Frontiers for the Future Programme, and by the Horizon 2020 Research and Innovation Programme’s MetalIntelligence project.

Mine tailings have rare earth, up until now nothing was done.