Ammonia is liquefied under relatively mild conditions, i.e. -33 ˚C in ambient pressure or 8.5 atm in ambient temperature. Since this condition is similar to that of Liquefied Petroleum Gas (LPG) liquefaction, ammonia can be stored and transported with similar infrastructure for LPG storage and transportation.

Ammonia is expected as fuel for power plants which require huge amount of energy. The parties are willing to prepare a new option for energy security between Russia and Japan by establishing a new value chain which transports ammonia produced in Russia to be utilized as fuel in Japan. 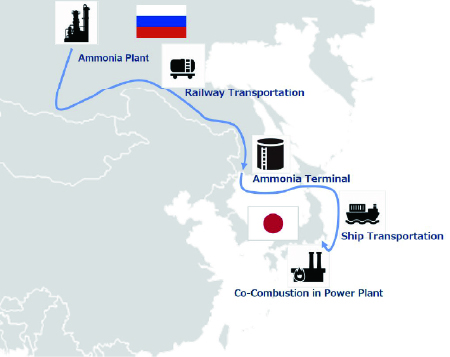 Based on the MOU signed by IOC and JOGMEC, JOGMEC initiated the feasibility study of the value chain to transport ammonia to be converted from hydrogen produced by IOC in eastern Siberia, from Russia to Japan by entrusting TOYO and ITOCHU.

As the next step, IOC and JOGMEC plan to conduct a study on blue ammonia production system that combines conventional ammonia production from natural gas and CO2 capture technology, whereas the captured CO2 will be utilized for CO2-EOR.

CO2-EOR (Enhanced Oil Recovery) is a process to inject CO2 in the oil reservoir with the aim of enhancing the production of oil, and increasing the overall recovery rate of oil from the reservoir.

By realizing the blue ammonia production system and value chain, mass-produced blue ammonia can be stably supplied to Japan and available as fuel for power plants.

TOYO has about 80 project experiences in ammonia plant construction and has been working on consulting, engineering and construction of oil & gas production facilities and enhanced oil recovery unit. In addition, TOYO has more than 50 years business history in Russia including eastern Siberia.