Airbus is conducting studies to determine how scalable a hydrogen fuel cell “pod” configuration, among others, could be to large commercial aircraft. The aviation industry has developed numerous configurations—twinjet, s-duct, winglets, contra-rotating propellers—over the last five decades that have enabled aircraft to fly higher, faster and longer. Now, Airbus engineers are unveiling a new configuration as part of the ZEROe program (earlier post) that could enable a passenger aircraft to fly farther than ever without emissions. The ‘pod’ configuration is essentially a distributed fuel cell propulsion system that delivers thrust to the aircraft via six propulsors arranged along the wing. Hydrogen fuel cells have very different design considerations, so we knew we had to come up with a unique approach.

Hydrogen fuel cell technology has yet to be scaled up to a passenger-size large commercial aircraft. Smaller experimental hydrogen aircraft, comprising up to 20 seats, can rely on a traditional fixed-wing configuration with two propellers. But more passenger capacity and longer range require another solution. This is why Airbus is studying a variety of configurations, including “pods,” to determine which option has the potential to scale up to larger aircraft.

This ‘pod’ configuration is a great starting point to nurture further inquiry into how we can scale up hydrogen technology to commercial aircraft. This is one option, but many more will be conceptualised before we make a final selection, a decision that is expected by 2025. 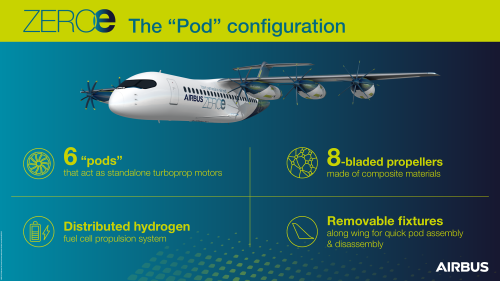 Each pod is essentially a stand-alone propeller propulsion system powered by hydrogen fuel cells. It consists of the following elements:

Another feature of the pod configuration is its removable fixtures. This means each pod can be disassembled and reassembled in record time. This approach could provide a practical and rapid solution for maintenance and potentially hydrogen refueling at airports.

The pod’s eight-bladed propellers, made of composite materials, are shaped to provide added thrust during the takeoff and climb-out phases of flight. The advanced airfoil design is expected to lead to improved efficiency and performance.

Although advanced in its design, the pod configuration still requires a lot of work to determine whether it could be a suitable solution. To date, it remains one of the technology options that Airbus engineers are considering as they work towards launching the ZEROe program.

A patent application for the pod configuration was published in December 2020, 18 months after its initial submission. This highlights that Airbus has been working on ZEROe since at least 2018. Several more patent applications are expected to be submitted over the coming months and years as R&D continues on the ZEROe program.

Scientists at MIT believe that to make commercial electric aircraft viable using batteries will take an energy density of about 1,500 Wh/kg; todays common energy density runs about 300Wh/kg which leaves the door wide open for H2 in this transportation segment.

The hydrogen-fuel-cell-powered “pod” configuration looks like a system that could work in the near term. Probably, based on the ATR 72-600 turboprop aircraft (instead of two PW127 engines @ 2,475 hp each, six 825 hp electric motors, and six 450 kW fuel cells - 78% cruise power). Liquid H2 stored in "slipper tanks similar to the Lockheed JetStar wing mounted fuel tanks.
So this could definitely work. Though Liquid H2 fuel costs and infrastructure are another challenge for practical air travel.

For a mid-size to big airliner, the gas turbine engine is efficient enough when burning LH2 and therefore Fuel Cell is not necessary. With LH2 that is very cold, it can be used to cool the air intake charge before entering the compressor, thus significantly reducing the compression work and hence increase thermodynamic efficiency. Mid-size airliner turbine engine can see an increase in thermal efficiency by 10-20%, with similar gain in power density, as the result of using LH2 to cool the air intake charge.

LH2 would best be placed in the rear of the aircraft in one big spherical tank in order to minimize the surface to volume ratio and hence reducing insulation weight and boil-off rate. The fuselage is simply lengthened enough accommodate the LH2 tank without reducing cargo and passenger space. An added advantage would be great reduction in post-crash fire hazard after impact-survivable crashes.

The wing fuel tanks for kerosene could be left intact in order to have a jet-fuel capability in case of operating at airports that do not carry LH2. LH2 may not be available in many airports at the beginning of the Hydrogen Economy. This is an added advantage of using existing aircraft designs, existing gas turbine engines modified for use with LH2, and the fuselage will simply need lengthening, without having to replace the whole aircraft. With modern fly-by-wire controls in newer generations of aircraft, lengthening of the fuselage would be easier, by simply using longer electric cables to transmit control commands from the cockpit. Hydraulic controls can also be accommodated by simply using longer hydraulic piping.

Lengthening the fuselage is not always an option; the aircraft has to rotate a certain amount for takeoff, and a longer fuse means you can't rotate as far without tail strikes.  Extending the landing gear has its own problems.

Surface/volume ratio issues on aircraft H2 tanks are probably not a big factor, as boiloff will be far slower than consumption in flight.  If you're concerned about it, run an APU to operate a cooler and top off the tanks right before flying.

When did liquefying and storing hydrogen become cheap and lightweight?

The ATR 72-600 jointly manufactured by Airbus and Leonardo is still in production and few modifications would be necessary. Probably just wing extensions like Boeing did on the 777X. What is interesting is that this concept shows a straightforward path to using Fuel Cell electric power.

Liquid H2 is too expensive for commercial aviation (even for space travel). However, H2 storage with the volumetric density of LH2 might solve the problem. Either "Blue" or "Green" Ammonia or the advanced solid state H2 storage being developed in Australia might work better.

The real potential for this concept would be in eVTOL. Look at the ASX Modi-One for example, which is a 4 engine tilt wing VTOL. The "Pod" concept could work well for this design.

@EP,
Great point regarding the potential of tail-strike with lengthening of the fuselage. There are several potential solution short of lengthening the landing gear strut.
1.. No modification to the aircraft length and reduce seat count on existing aircraft, while accepting heavier cargo payload in the front cargo section to make up for lower seat count, because it would cost quite a bit to lengthen the fuselage existing aircraft.
2.. On aircraft not-yet-built, the fuselage would be designed to be lengthened BOTH in front of the wings AND behind the wings in order to maintain optimum balance. This would minimize the fuselage lengthening requirement behind the landing gear.
3.. Furthermore, the use of LH2 while carrying the same payload would mean much reduced Maximum Take Off Weight (MTOW) and hence no need for high angle of attack like before.
4.. If higher payload in the form of heavier cargo load is taken on to offset the much-lower fuel weight, then the aircraft will not be allowed to be used on short runways, only on longer runways, or higher flap angle will be used to reduce rotation angle requirement on takeoff on shorter runways, because takeoff distance is always longer than landing distance.
5.. In practice, building some extra speed before rotation would allow for reduction in angle of rotation and would enhance safety if runway is long enough.

@EP
On second thought, BOTH LH2 tanks, in front and in the rear are needed due to problem with weight balance as the fuel is being consumed. The front LH2 tank can be placed below the passenger floor, in the front cargo area, while the rear tank can be placed in the tail section, thus taking up less passenger seat space, though cargo space will be reduced and will have to take on denser cargo to make up for the loss of some cargo space, unless the fuselage is being lengthened as discussed.

@gryf,
Yes, smaller-aircraft turboprop engines have poor efficiency and would be better off replaced with FC that can double the fuel efficiency. Additionally, due to the much lighter fuel weight of LH2, payload can increase significantly, thus allowing LH2 price per BTU to be as high as 3 times the price of jet kerosene fuel. So, if jet fuel now costs $2 per gallon, then LH2 cost of $6 per kg would be tolerable. Back in 2001, NASA paid $3.66 per kg of LH2 and $0.16 per kg of LO2. Adding inflation and the bulk price of LH2 today would still be affordable to replace kerosene jet fuel.

@E-P
On the third thought, instead of lengthening the fuselage design in not-yet-build aircraft, the fuselage could be widened to accommodate larger volume instead of lengthening the aircraft. For example, the B 737 500 had fuselage width of 3.75 meter, and we want to widen it about 0.5 m to accommodate another passenger's row. With the length of the untapered fuselage being 26 m, the old volume is 287 m^3 vs the new volume to be 368 m^3 for a gain of 81 m^3. The plane carries about 15,000 kg of fuel, so with H2 weighing a third as much, will end up carrying ~5,000 kg of LH2. With a density of 71 kg per m^3, this would occupy a volume of 70 m^3, which is below the volume gained from widening the plane.

Of course, due to the higher efficiency of the engine running on LH2 and the lower Max takeoff wt, we will need quite a bit less LH2 to travel the same distance, so some of the extra volume can end up as polyurethane insulation foam that can also add immense structure strength to the fuel tank as well, and any left-over can be used to increase payload to compensate for a lot lower fuel weight.

Albert E. Short asked: "When did liquefying and storing hydrogen become cheap and lightweight? "
Answer: Ask NASA, who paid $3.66 per kg of LH2 in 2001. With inflation between 2002 and today = 45%, then $3.66 x 1.45 = $5.3 per kg.
In regional airliners with PT6 turboprops, the FC system can double the efficiency propeller to propeller, thus we can divide this cost in 1/2 = $2.65 per GGe of jetfuel. Even better, the very lightness of LH2 permit gain in payload weight, even doubling the payload weight that is especially applicable to heavy cargo, so we can divide this $2.65 by half again, to $1. 325.

In larger airliners with higher-efficiency gas-turbines, the efficiency gain using LH2 is not as dramatic as with smaller regional airliners, but at least the cost of LH2 can equal the cost of jetfuel per ton-mile of payload.