When ridesourcing companies Uber and Lyft show up in urban areas, vehicle registrations per capita increase by 0.7% on average, increasing even more in car-dependent cities, according to a new study led by researchers at Carnegie Mellon University.

In an open-access paper in the journal iScience, the team estimates the effects of transportation network companies (TNCs) Uber and Lyft on vehicle ownership, fleet average fuel economy, and transit use in US urban areas using a set of difference-in-difference propensity score-weighted regression models that exploit staggered market entry across the US from 2011 to 2017.

The study found no statistically significant average effect of TNC entry on fuel economy or transit use but did find evidence of heterogeneity in these effects across urban areas, including larger transit ridership reductions after TNC entry in areas with higher income and more childless households. 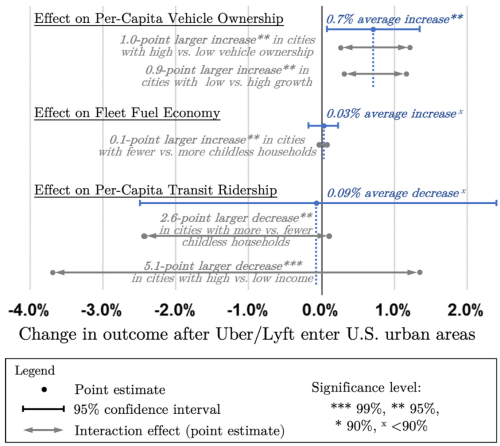 The researchers analyzed data from major US cities between 2011 to 2017, comparing trends in cities where Uber and Lyft entered with those where they didn’t.

I would have expected people to own fewer vehicles once they gain access to this alternative transportation mode. But that’s not what we see in the data. One possible explanation could be that there’s an effect on the other side, where somebody who was on the verge of being able to afford a vehicle now has an incentive to buy one and earn some money with it. So vehicle adoption by Uber and Lyft drivers may outweigh the effect of riders getting rid of their personal vehicles.

Michalek suggested that the larger reduction in transit use in cities with higher income and fewer children could be linked to more disposable income and a willingness to pay for a more convenient mode of transportation.

While the researchers were able to identify trends across cities in their data analysis, they are also interested in investigating how these trends stack up in specific cities. Additionally, their analysis only accounts for pre-pandemic patterns that have certainly changed because of COVID-19.

Of course, the pandemic has caused enormous changes in ridesourcing, public transit, and transportation trends in general. With many employees working from home, and many others opting to use personal vehicles for travel, ridesourcing services have seen a drop in riders. The question is, once the pandemic is behind us, do we return to the kinds of travel patterns and choices we saw before the pandemic, or are there systemic changes that won’t go back to normal because people have permanently changed their behavior? We won’t know for sure until it happens.