In the first study on the characteristics of urbanization in large cities around the world, researchers at the Department of Civil Engineering of the University of Hong Kong (HKU) analyzed cities’ urban built-up areas (BUAs) expansion, population growth and greening BUA changes, and found an extremely uneven pace of urbanization in those cities in the last two decades. The findings are presented in an open-access paper in Nature Communications.

The authors suggest that not dealing with the urban problems in a timely manner will pose major challenges to sustainable development.

The study, conducted by Professor CHEN Ji at the Civil Engineering Department of the Faculty of Engineering, HKU, in collaboration with the Shenzhen Institute of Advanced Technology, Chinese Academy of Sciences, and National Supercomputing Center in Shenzhen, analyzed the development of 841 large cities throughout the world with BUAs of more than 100 km2 based on MODIS satellite data from 2001 to 2018 obtained under the International Geosphere-Biosphere Program.

Breakdown of the 841 large cities by country income-levels: 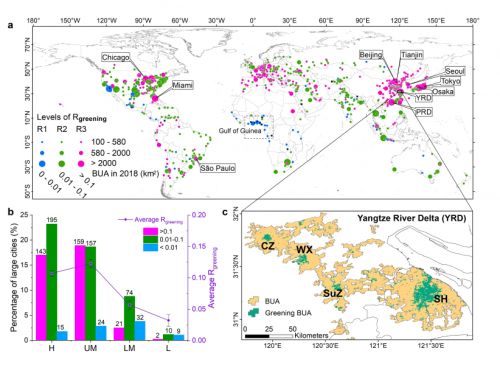 Cities in the low-income and lower-middle-income countries had the highest urban population growth on average, but were substantially lagging behind in BUA expansion and infrastructure development, resulting in serious urban problems such as slums and crowding.

Due to the rapid economic growth in the study period, China invested a large amount of resources into infrastructure construction for advancing the urban living environment. Its progress in greening has been impressive, benefitting at least 108 million city dwellers, accounting for 32% of the total greening at BUAs in the large cities over the world.

The Pearl River Delta (PRD) is taken as a mega city in the study comprising a cluster of cities including Guangzhou, Shenzhen, Dongguan, Foshan and Zhongshan. Yangtze River Delta includes cities of Shanghai, Suzhou, Wuxi and Changzhou. 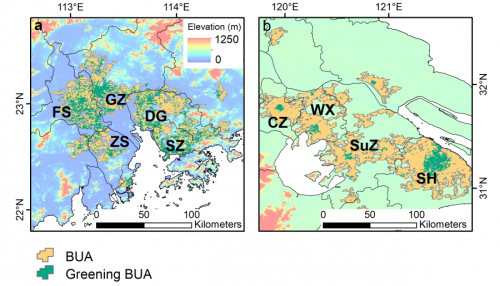 China will reach carbon emission peak before 2030 and carbon neutrality by 2060, and large cities with a significant greening trend play an important role in neutralizing carbon emission and mitigating the impact of global climate change in urban areas. For the majority of the developing countries, understanding the uneven urbanization in the past decades can provide scientific references for urban management, helping to strike a balance between urbanization, population growth and environmental changes.

Our research provides a low-cost method for monitoring sustainable urban development globally, and the quantitative findings contribute to a better understanding of how to achieve rational urbanization and sustainable development in various cities. The findings also serve as a warning that continuing and rapid urban development without proper and long-term planning can be detrimental and the urgent need is to strengthen urban planning and governance, especially in developing and least developed countries.