Home About Contact RSS GCC Twitter Newsletter
KBA: Alternative drives accounted for around 25% of new vehicle sales in Germany in 2020; 13.5% with electric drive
SK Group to invest $1.5B in Plug Power; strategic partnership and JV to accelerate H2 economy in Asia

This is the latest of my occasional updates on long-term trends in U.S. vehicle fuel economy. Specifically, this study examines actual fuel economy of cars and light trucks (pickup trucks, SUVs, and vans) from 1966 through 2019. (My previous update included data through 2017.)

Calculated vehicle fuel economy is available going back to 1923. However, the starting year of this analysis is 1966 because (1) for 1923 through 1935, fuel-economy information is available only for the entire fleet of all vehicles, and (2) from 1936 through 1965, light trucks were included with other trucks in the relevant statistics.

The primary measure in this analysis is the average miles driven per gallon of fuel for each year. For 1966 through 1985, fuel economy was calculated from the information in a summary publication by the U.S. Department of Transportation. Annual statistics from the U.S. Department of Transportation were the sources of the information for 1986 through 2019.

The graph below shows the changes in actual vehicle fuel economy from 1966 through 2019. 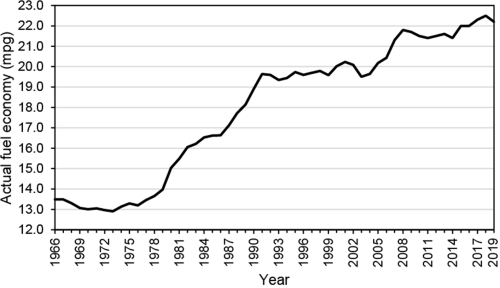 The measures used in the present analysis (miles per gallon of fuel, and gallons of fuel per 100 miles) do not allow us to make direct inferences regarding changes over time in total energy consumed (e.g., total Btu). This is the case because the analysis did not take into account the following factors and their changed contributions over time: greater energy content of diesel than gasoline, lower energy content of ethanol blends than pure gasoline, lower energy content of biodiesel blends than pure diesel, and electric energy consumed by plug-in electric vehicles. (Concerning the latter: Even if all 1.4 million plug-in electric cars and light trucks that were sold in the United States through December 2019 were still on the road, they would represent only about 0.6% of all registered cars and light trucks in 2019.)