A consortium comprising Solaris Bus & Coach, Impact Clean Power Technology S.A. and TAURON Polska Energia will implement a project titled “Second Life ESS” with the aim to create a prototype system to store electric energy based on retired electric bus batteries. The project is being co-financed by the National Center for Research and Development (NCBiR) in Poland.

Solaris launched its first electric bus back in 2011. Since then, the manufacturer has sold more than 1,000 e-buses to several dozen towns and cities across 18 countries. The first of the vehicles delivered then have now covered over half a million kilometers each. This means that in some of them it will be necessary to replace their battery packs. 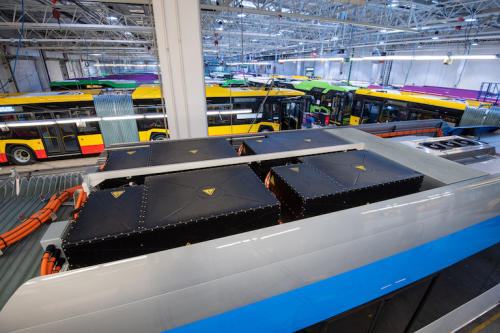 The aim of the project is to utilize lithium-ion cells the parameters of which are no longer optimal when it comes to supplying power to vehicles. But thanks to their integration in energy storage systems, they may gain a second lease of life.

Second Life is a research project, carried out in collaboration with the National Center for Research and Development. The work, aimed at developing an energy storage prototype system, is due to be completed in 2022.

Solaris will provide batteries with a nominal capacity of 160 kWh for the construction of the prototype system as part of the project. Previously, the batteries had been used in an electric bus operated by public carrier PKM Jaworzno.

PKM Jaworzno is one of Poland’s leaders in e-mobility. 23 battery-powered buses are already in use in its fleet and another 20 ebuses from Solaris are during delivery process. It means that soon almost 80% of bus fleet in this city are going to be battery-electric buses.